97 points James Suckling
"A truly staggering dry riesling, whose expansive frame is packed with fresh-pineapple, smoky and floral aromas. Gigantic mineral complexity in this simultaneously succulent and subtle package, with an intensely salty finale that focuses to a single point. Only just beginning to give its best! Drink or hold."

Vinous Reverie Notes
Opening a Bottle - Kevin Day
The Grand Cru Rangen de Thann: A Vineyard’s Story
"...The Clos Saint-Théobald
To the east of the Clos Saint Urbain, the Rangen hillside angles away from the river and faces fully to the south. This pitch is known as the Clos Saint-Théobald, and, like the Clos Saint Urbain, it is a monopole belonging to one family — Domaine Schoffit.
Like the Humbrecht family, Bernard Schoffit felt the irresistible pull of the Rangen from afar. The problem was convincing his father it was worth the toil.
Named after the parish church of Thann below, the Clos Saint-Théobald had once been farmed by Franciscan monks, who erected and maintained an elaborate terracing system to reduce erosion on this portion of the hillside. After World War II, the Clos Saint-Théobald (again, not a true walled vineyard, but a vineyard with walls) came into the ownership of a weinstube in Thann. For decades, the wines were served out of the pub and — as Olivier Humbrecht recalled — were rustic to say the least.
Spurred on by the sudden success of Domaine Zind-Humbrecht’s Rangen wines in the early 1980s, Bernard Schoffit began to explore buying the Clos Saint-Théobald. But unlike Léonard and Olivier Humbrecht, there wasn’t immediate consensus within the family. “Robert tried to convince Bernard that the acquisition was a bad move,” Valerie Bilgri, a representative from Schoffit’s importer, Weygandt Metzler, told me. “But it has turned out to be one of the most defining sites for the domaine.”
Less steeply pitched than the Clos Saint Urbain — but nonetheless overgrown and in terrible shape at the time — the Clos Saint-Théobald required ample work from the family and its crew when they finally bought it in 1986. The stone terraces that dated back to the Middle Ages required special attention, as they practically hold the hillside in place. Stone by stone, Bernard rebuilt them, and those monastic walls continue to provide a framework for the family’s horizontally trained vines, which are unique to the Rangen.
Brooklyn-based wine retailer Matt Rossiter — who works closely with Weygandt-Metzler and who recently toured the Clos Saint-Théobald with Bernard Schoffit and his son Alexandre — called the Rangen imposing. “Arriving in Thann, it rises like a wall on the edge of the town,” he wrote, adding that it seems to loom in the distance from every street in town. “The vineyards [of Clos Saint-Théobald] themselves are aggressively steep. The footing is treacherous as loose rocks — both small and large — and dry, sandy soils slide constantly, threatening to send you tumbling down the hillside.”
He added: “The Schoffits will instruct you: if you fall, just don’t damage the grapes.”
The subtleties between the two clos vineyards are slight but important. Because Clos Saint-Théobald faces directly south, it is a bit warmer, which allows the wines consistently to reach the sweet-wine territory ideal for Vendange Tardive or Sélection de Grains Nobles. Furthermore, the Thur River’s slight bend away from the slope means that the effects of noble rot are even more confined to the lower slopes..."

Bernard Schoffit is a brilliant pioneer in Alsace’s greatest Grand Cru, Rangen de Thann. The domaine started by Bernard’s father, Robert at 10 hectares, is situated near Colmar.  30 years ago, Bernard, then still very young, embarked on an ambitious program of buying land in Rangen, around the Clos St. Theobold. Totaling nearly 6.5 hectares, a good part of it had been abandoned because it was too steep to work. Through sheer determination and ambition, he has now reclaimed all 6.5 hectares. From these incredibly steep slopes, with extremely low yields, he is making simply extraordinary wine from each cépage he grows. 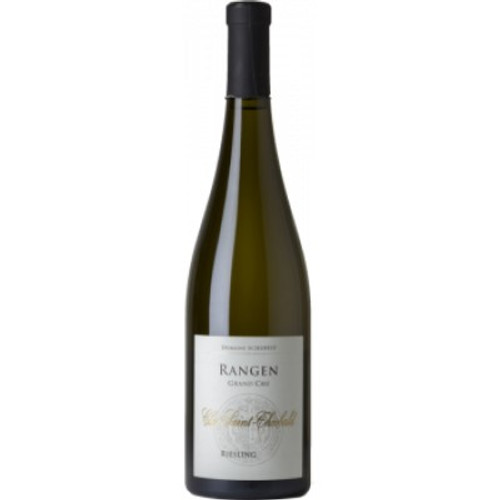