97 points Robert Parker's Wine Advocate
"The 2015 San Leonardo pours forth with a beautiful velvety appearance and sultry dark garnet color. This wine shows a lot of life and dark fruit purity with black plum, blackberry, cassis and tarry prune. There is a delightful note of black pepper that is specific to this warm and sunny vintage. The fruit shows softer and richer concentration compared to past vintages and more pulpy density that gives this edition a bigger profile in terms of mouthfeel. Production is 75,000 bottles. San Leonardo is a wine made for long aging, but the nice thing about this vintage is that the bouquet remains quite accessible at this young age. Nevertheless, I'd still suggest keeping this bottle in your cellar so that it can calmly finish its evolution."

95 points Vinous
"The 2015 San Leonardo is a classic in the making. The bouquet is wonderfully perfumed with peppery florals, mixing tart cherry and blueberry with white smoke, hints of graphite and shaved cedar. Silky textures race across a core of juicy acids and minerals, making for a ripe yet cool-toned and pleasurably tactile expression. Youthful tannins slowly make themselves known toward the close. Long, structured and spicy, the 2015 finishes with a crescendo of tart blue and black fruits, tapering off to notes of subtly sweet spice. As good as this is today, it will only get better over time. That said, it doesn’t appear that this is going to shut down anytime in the immediate future, so it’s certainly worth checking on a bottle or two before forgetting the rest in your cellar."

Jancis Robinson
"From a palpably riper vintage than the 2014 tasted yesterday but still with San Leonardo's trademark restraint. This is very youthful and clearly has the structure underneath to go quite a distance. Great freshness and bite but not at all skinny. Much more aérienne than the average red bordeaux – on which it was originally modelled. Very long indeed. 17.5+/20 points."

Vinous Reverie Notes
Winery:
Terroir: The San Leonardo estate is comprised of approximately 270 hectares of forest land designated as a nature reserve and of 30 hectares of vineyards of exclusively red grapes, which are all farmed organically.
Thanks to its position at the gateway to the Alps, San Leonardo is a kind of meeting point for the Mediterranean and Alpine climates. The estate benefits from both the tempering influences of the Ora breezes blowing up from Lake Garda and substantial temperature differentials between day and night, which not only give depth to the grapes’ aromatics, but slow the ripening process, so that the harvest begins only in mid-September, and lasts through most of October. This unique enclave, known as the Campi Sarni since Roman times, is characterised by relatively infertile, well-drained chalk and clay soil, and 'mammeloni', river benchlands with sandy sediment that built up in stages through the lateral action of alluvial cones. Sited at a relatively low elevation of 150 metres, the Merlot is planted in gravel-rich soils that were once the bed of a branch of the Adige. Sandier, pH-neutral soils, at elevations of 150-200 metres, host Cabernet Sauvignon, Cabernet Franc and the venerable Carmenère vineyards. All of the vineyards are in well-drained, nutrient-poor soils that yield grapes whose wines boast levels of anthocyanins that are unusually high, and not just for the Trentino.
Today San Leonardo’s viticultural philosophy dictates vine-rows that follow the contours of the slopes, in order to capture as much sunlight as possible. Vine densities vary according to the period in which the vineyards were planted and to the training system. Vineyards trained to Guyot and to spurred cordon have 6,600 vines per hectare, and yield a maximum for 60 quintals per hectare, while those trained to the Trentino double pergola are at 1,750 per hectare, which includes the old vines of Carmenère. To yield truly top-quality fruit, this variety needs severe pruning, which limits the crop to no more than 90 quintals per hectare.
Cellar: There is little to be found in the way of ultra-sophisticated, latest-generation equipment at San Leonardo. The required levels of temperature and humidity are maintained by the barricaia’s semi-subterranean location, while in the fermentation cellar, at ground level, one sees just cement vats, where the spontaneous fermentations, without any selected yeasts added, take place and the wines spend the first phases of their life. Ceaseless monitoring ensures the correct progress of the fermentations, always kept at low temperatures without the aid of any artificial refrigeration but with just the help of natural ventilation. The macerations last some two weeks, which helps to extract only the finest tannins though the aid of frequent pumpovers carried out every day. This is, then, a winemaking cellar that still displays an exquisitely artisanal character, with not a trace of cold electronics. But it is also true that not a single thing is left to chance. Maturation of the various batches of wine is carried out separately in the large subterranean cellar, in Italian barricaia, where more than 600 barriques of different age, toasting and forest origin are carefully aligned in a spectacular setting enriched by a monastic atmosphere which infuses this place.
Blending, bottling, ageing: The final blends, each with a different proportion of lots reflecting the distinctive characteristics of an individual growing year, are assembled just before bottling. Every single barrel is rigorously tasted by Marchese Carlo and his son Anselmo, Estate Director Luigino Tinelli, and Consultant Carlo Ferrini. The wines are then bottled, using only natural cork, and remain in the ageing cellars for nearly 2 years before being released. A significant reserve of up to 10% of each vintage is kept in the cellar for many additional years, so that the most demanding clients may acquire wines that have reached perfect maturity and can thus be appreciated at their full potential.

Blend: 60% CabernetSauvignon, 30% Carmenère and 10%Merlot. Tasting Notes: Intense ruby red color with garnet highlights. A wine of remarkable intensity on the nose, which layers bell peppers and wild berries over a background note of vanilla. The palate is full, warm and impressively rounded, with intense aromatics that linger on the palate. Food Pairing: Ideal with poultry, red meats, roasts, braises, game and aged cheeses. 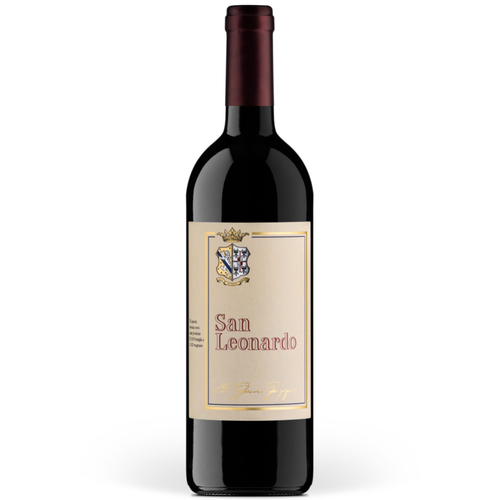