Vinous Reverie Notes
Jancis Robinson - Wine of the Week
"Two years ago we ran a competition to rename Château Goubau, the Castillon estate bought by Jacques Thienpont and his sister in 2016. The name that was finally chosen, L’Hêtre, meaning ‘beech tree’, was in fact a family suggestion but it happily reflects Jacques Thienpont’s passion for trees, and wood in all its forms, already seen in the names of their other wines Le Pin (pine) and L’If (yew).
The history of the Flemish Thienpont family in Bordeaux dates back to 1921 when Jacques’ grandfather Georges bought Château Troplong Mondot (sold just over a decade later to pay off his debts), then three years later Vieux Château Certan.
The family, wine merchants in Belgium since 1842, is now well entrenched on Bordeaux's right bank, as Fiona Morrison MW, married to Jacques, recounts in her new book Great Wine Families – A Journey through Europe (published 2018 in Flemish by Lannoo as De Grote Wijnfamilies – Een Reis door Europa and not yet available in English). Cousin Alexandre with his son Guillaume run Vieux Château Certan while cousin Nicolas and his son Cyrille are in charge of Chx Pavie Macquin, Beauséjour Duffau-Lagarrosse and Larcis Ducasse.
The branches are also firmly intertwined: Jacques and Fiona’s nephew Cyrille manages L’If and nephew Maxime is the winemaker at L’Hêtre.
L’Hêtre 2016 Castillon Côtes de Bordeaux is the first release of this wine from the organically farmed estate perched at 100 m on the end of the St-Philippe d'Aiguilhe limestone plateau, the highest point in Bordeaux. The current 10 ha (25 acres) of vines – Merlot and Cabernet Franc – face south east, planted on the plateau or on the limestone, clay and chalk slopes. Last year they bought the adjoining property, Ch Montagne, with 25 ha, of which 6 ha are planted. Compare this with the teeny 2.7 ha at Le Pin and one might hope this will remain an affordable wine for those who love the fresh and seductive style of Jacques Thienpont’s vinous offspring.
Here’s my enthusiastic tasting note on L'Hêtre 2016, added to over a period of several days as I tasted and retasted it, impressed by how lively and pure it remained after opening:
‘Rich in blackcurrant fruit with a savoury dark glow to make it more than just fruit. Just a touch of smoky char even though the oak is well in the background, a seductive fruit sweetness. On the palate, this is beautifully balanced, the alcohol perfectly integrated in the tannic structure and fruit core with a fresh tang that runs through the middle. There's a cool fluidity to it even with its depth and length. Fine, dry, lingering and savoury aftertaste. Impressive first vintage with a promising future in the bottle. I opened this on a Sunday evening and it was still tasting fresh and vibrant four days later. This is a very classy wine, and the tannins tell you everything: fine, definite, building in the mouth but in perfect balance with the fruit and freshness. Blue-blooded Castillon. Catch it while you can.'
Congratulations to Maxime Thienpont, pictured above on the right with Jacques and Fiona. He has crafted this wine from 95% Merlot and 5% Cabernet Franc, fermented in concrete and oak vats and aged 15 months in French oak barrels, including one-third new.
I think it will benefit from at least another year in the bottle and should age well until at least its tenth birthday, and probably a lot longer, though this depends on your personal preference (see the current discussion on our Members’ forum).
There is a second wine, Raison d’Hêtre, made from the younger vines and lower slopes. It's a little lighter in body and tasted as if it had a little more of the Cabernets in the blend though the proportions are the same, but this was perhaps just slightly less ripe Merlot fruit. It should be good value now but future vintages are likely to be more impressive as the vines age and the new owners and winemaker find their feet and get to know their vineyards more fully..." 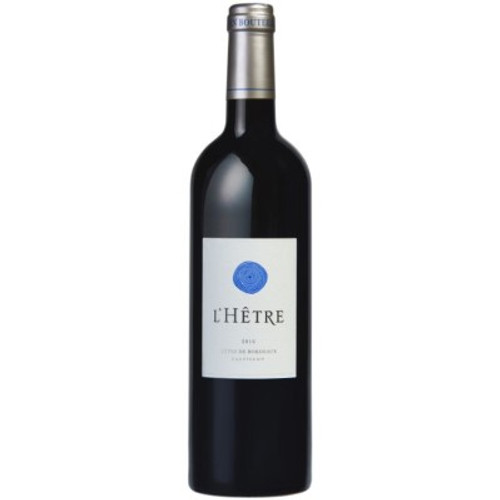