96 points James Suckling
"There’s no turning back once the enveloping nose of fresh nuts, raw brown sugar, chocolate and saffron has you in its grasp! Rich to the point of slight oiliness on the dense mid-palate, this unique champagne is very concentrated, but the incredible texture, which reaches a climax in the full, silky finish, is every bit as impressive. A cuvée based on the 2016 vintage with a generous dose of perpetual reserve (solera system), founded in 1990. From organically grown grapes. Drink or hold."

Jancis Robinson
"Small oak barrels played a crucial role here. This is a new cuvée released to replace their 100% Pinot Noir Code Noir. Their old Hommage à François Hémart is no longer produced either. 100% Pinot Noir aged for a total of 54 months: 12 months on lees without racking in small oak barrels, then six months rounding out on fine lees at ground temperature (a process apparently called 'mise retardée', followed by 36 months of ageing in bottle.
Pale gold – paler than some wines from this house. And slightly fizzier. Pure Pinot on the nose and lip smacking. Full and rich, with the mousse sparking the palate to prevent overkill in terms of weight. Extremely long and powerful. Super-dense. Demands attention and is rich rather than sweet. On the finish this would cure the sorest of throats. It may even be worth ageing longer. 17.5/20 points."

Vinous Reverie Notes
Champagne Henri Giraud is the oldest Champagne house still owned by its founding family – the Giraud-Hemart family has farmed vines at Ay since 1625. However, it is only since current head Claude Giraud took over that the wines have been released under the family name. Hommage au Pinot Noir Champagne pays homage to Pinot Noir as grandfather of Syrah and father of Chardonnay which, in the eyes of Henri Giraud Champagne House, deserves respect, humility and time. This wine draws back to its origins and pays tribute to the grape variety. 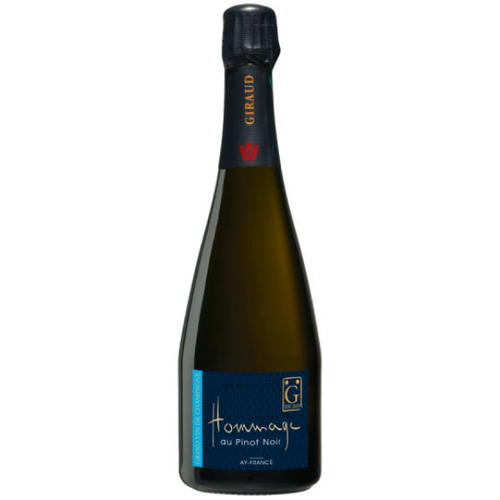