Jancis Robinson
"A Ruché with passito, or dried, grapes and more interesting than many Amarone.
This has bags of character. Impenetrable dark ruby. Notes of dark cherry and orange marmalade on the nose. The passito method used here has reined in Ruché's exotic rose-petal aroma and turned it into something much more poised, although with plenty of concentration. Think: port meets Sfurzato di Valtellina. Generous dark fruit with supple acidity and super-fine tannins. Impeccable balance. 17.5/20 points. (WS)"

Vinous Reverie Notes
The long and colorful history of the Ferraris family is almost too wild to believe: Luca’s great grandfather went to California in search of his fortune during the Gold Rush and struck it rich! He sent home to Monferrato the money that would purchase the family estate in 1921. Fast forward to 2001: Luca Ferraris finishes military service and decides to abandon his home in Turin for the countryside to cultivate a little-known indigenous grape called Ruche. As luck would have it, a chance encounter with Randall Graham at VinItaly in 2002 led to an odd fax from Bonny Doon later that year: Randall wanted 1000 cases of Luca’s Ruche for his Ca del Solo project! The business with Randall launched Luca to the big time, giving him the possibility to invest in his beloved Ruche variety. And so what about this variety Ruche? To quote Robert Camuto at the Wine Spectator, “A lot of places call their wines unique, but Monferrato’s Ruchè really is singular—thanks to an aromatic wallop on the nose that’s rare in reds. A recent sampling of young wines from Monferrato… floored me with their minty scents that leapt out of the glass, followed by a tannic bite.” Or Randall Graham in that same article: “I imagine (Ruchè) as the love-child of Nebbiolo and (another rare aromatic Piedmont red) Brachetto. Rose petal, anise and cardamom perfume that mercifully doesn’t cloy in virtue of its slight astringency.” Tasting Notes: At its heart the wine is a deep and compact ruby red with an initial garnet nuance. Once poured an elegant blend of blackberries, dried plums and sub-glazed cherries emerge, intertwining with floral hints of rose petals. 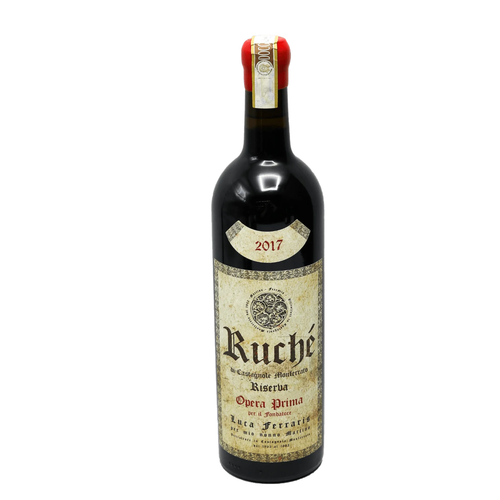