94 points Robert Parker's Wine Advocate
"The NV La Bota de Fino Macharnudo Alto 68 is a similar wine to what was bottled in the editions 54, 34, 27, 18, 15, 7 and 2; it is produced like the wines from yesteryear, fermented in bota and kept in contact with flor for some ten years. This is a classic already, and they are bottling more or less the same botas as in previous editions. Here, the soil is as strong (or more) than the long aging, and has lots of things in common, the chalkiness, with their other wines (think Navazos Niepoort for example), which provide a special sapidity. Some 6,000 bottles produced; they are producing a little bit more, so the wine is bottled every two years, as the wine ages nicely in bottle."

Jancis Robinson
"A saca made in June 2016 from the same batch of casks that gave the seven previous editions of La Bota de Fino. This most recent Fino release, with an average age between ten and eleven years, comes from a selection of casks of the solera, the first and the second criaderas.
Pale gold. Smells of heather honey without the sweetness – that smoky, spice, dried-grasses aroma but with a floral side, almost like lavender. But also a dusty/chalky mineral quality that tones down all those complex aromas. Gets more smoky in the glass, more dried grasses. I’m not sure what the numbers are on this wine but it tastes almost slightly sweet, even though it is bone dry. According to Jésus Barquín, it is the long ageing on the lees that give it this buttery/creamy (mantecoso) richness and thus the impression of sweetness. Rich, rounded, deep and long but still fresh even with all the generous creamy texture that contrasts with the almost bitter flavours. Salty, yeast finish. 18/20 points. (JH)"

Vinous Reverie Notes
“Appraising sherry is not an easy task, and having judged the category as part of a team during competitions, I know from experience that it can sometimes be difficult to arrive at a consensus. What is agreed upon is that Equipo Navazos offer a range of both delicious and thought-provoking sherries. If you are embarking upon a journey into the wonderful world of sherry, then I cannot think of a better springboard than Equipo Navazos.” ~ Neal Martin
La Bota de Fino 68 “Macharnudo Alto” is a saca made in June 2016 from the same batch of casks that already gave us the seven previous editions of La Bota de Fino. This new release, of an estimated average age between ten and eleven years, comes now from a selection of casks of the solera, the first and the second criaderas. The nose shows very complex and intense aromas, and a remarkable roundness in the palate (the traditional buttery touch of old finos) as a result of the autolysis of dead “flor” yeasts resting on the bottom of the vessel. This is particularly true of the solera, where the flor is almost exhausted, while in the second criadera the yeast is still very lively and active, which provides the spiciness and pungency that are also notable features of this extraordinary wine. Of course, the first criadera has an intermediate profile between the solera and the second.
This is a wine for connoisseurs, bottled almost unfiltered in order to preserve its golden color and racy character. It can be decidedly enjoyed upon release, but its evolution in bottle will continue to delight consumers for many years, provided it is stored with the same care as any other fine white wine.
It performs best at temperatures ranging from 9-10º C, where it shows a lighter and fresher profile, to 13º C, where it fully displays its rich and complex aromatic range. On the table it is a most versatile wine, successfully matching a wide array of diverse foods: of course Ibérico ham, but also seafood dishes, shepherd’s pie, “a feira” octopus, grilled vegetables, not too mature farm cheeses… 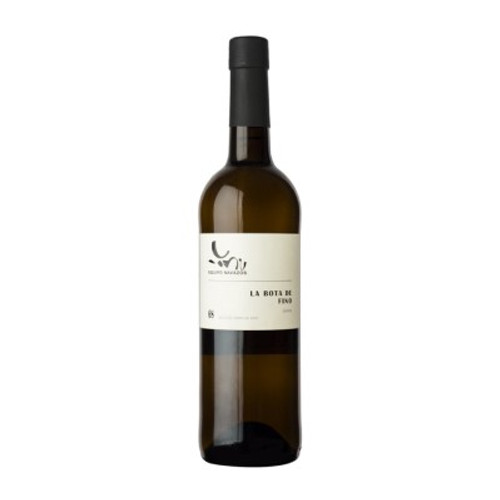