98 points Robert Parker's Wine Advocate
Equipo Navazos has recently released a handful of Palos Cortados because they jumped at the chance to buy some extremely old wines from Pedro Romero. This NV La Bota de Palo Cortado 51 Bota GF is a single cask that was bottled in February 2014 averaging some 75 years of age in a solera system. GF are the initials of Gaspar Florido, a grower from Sanlúcar who owned some of the best plots in the Armijo vineyard inside Pago Miraflores in Sanlúcar de Barrameda, where this wine was likely born. At that time the wines were cask fermented and could have had a few years under flor. The Palo Cortados 47, 48 and this one, and even the Amontillado 49 are somehow related and have a common origin, but this one is closer to the 48. Given that it's not easy to define these wines, other than to compare them with each other, I find this one to have more Palo Cortado character with a little more sweetness and with a hint of Oloroso. Out of these beasts, this is the most approachable and drinkable. Only 1,200 half bottles were filled with the content of one single cask."

Vinous Reverie Notes
Winery: La Bota de Palo Cortado 51 “Bota GF” is a stablemate to La Bota de Palo Cortado 41 “Bota NO” and La Bota de Palo Cortado 48 “Bota Punta”, as it has been sourced from another of the butts included in the solera GF-30 kept by Gaspar Florido in its old cellars at Rubiños St, in the very heart of the “Barrio” in Sanlúcar de Barrameda–and later moved to a dilapidated complex on the road to Trebujena which is still in use though no longer as a cellaring facility. It was in the latter that we had the opportunity to sample it for the first time with our erudite friend Álvaro Girón on a visit to then already aging Gaspar in June 2006. We were seriously impressed by the consistently high quality of those venerably old wines which so openly contrasted with the–let us be kind and go with “less noble”–venue. There were several GF-25 butts and only a few of the so-called GF-30, a spectacular old wine, which is precisely what we are bottling again, now as our release number 51.
Until 2013-2014, these butts have rested at the sacristy of Bodegas Pedro Romero, back to the “Barrio” and in fact very close to their original location. It was there we encountered them again and proceeded to sample them exhaustively in order to choose our favorite ones. Our label legend “Bota GF” is of course our modest tribute to the original wine and its maker until 2007.
Together with the rest of the releases in this short series, La Bota de Palo Cortado 51 “Bota GF” gives us an increasingly rare opportunity to encapsulate and enjoy a little sample of the history of the Sherry district. We are talking about releases 41, 47, 48, 49, and 51: their estimated average ages range from 50–in the case of the youngest–to 80 years. There is simply not that much venerably old wine left around anymore, not to mention as balanced and harmonious as these; not even in the combined cellars of Jerez, El Puerto and Sanlúcar, and we fear that the chances of having access to jewels such as these are unlikely to abound in the future–especially at these prices and in lots of multiple wines of the same breed for us to compare. 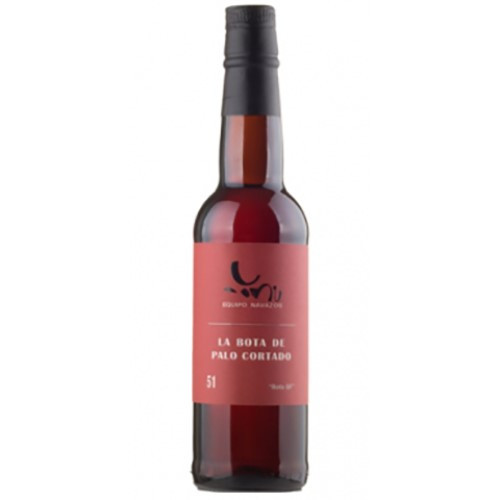