95 points Vinous Media
"The 2018 Hoë-Steen is predominantly Chenin Blanc, planted toward Darling on deep iron-clay soils and usually picked after the reds. The vines were planted in 1968. This has a more stony bouquet than the Skaliekop, a very slight nutty/smoky note emanating from a few Palomino vines. The palate is just superb. It is supremely well defined with a lovely lock of salinity that runs from start to finish. There is tangible energy to this wine, which displays a hint of tangerine and even menthol toward the finish. Superb."

Jancis Robinson
"Hoë means tall and Steen the old name for Chenin Blanc in South Africa. Vineyard planted in 1968 west of Malmesbury towards Darling, in red iron- and clay-rich soils. Mass-selection vinifera – primarily Chenin Blanc, but some Cape Riesling (Crouchen Blanc), False Pedro (Cañocazo), Palomino, Sémillon and Clairette Blanche vines have been discovered – grafted onto rootstocks a year after the rootstocks were planted. This south-facing 2-ha (5-acre) vineyard ripens late and was their last vineyard to be harvested in 2018 (even after Cinsault), about a week later than usual in the second half of February. Smaller canopies due to the lack of rainfall for three consecutive winters. Hand sorted, whole-bunch pressed, one year in old French oak barrels. A Certified Heritage Vineyards wine. The yield was 3 t/ha in 2017 but <2 t/ha in 2018. I asked whether he adjusted pricing to take account of this? ‘We’re not Burgundy, so no,’ said David. 2,000 bottles produced.
Creamy texture. Racy and lifted. Very dancing and fine. Real impact on the palate. Lightly chewy finish. Very long. 17.5/20 points."

Vinous Reverie Notes
A Steen vineyard planted back in 1968 on the western part of the Swartland on route to Darling, in deep iron rich coffee stone clay soils, makes for one of their single vineyards which we started working with in 2013/2014. This vineyard is a mixed bag of vineyards propagated in the 1960’s and has its own character. This is their last white vineyard for picking and takes a couple of months to finish fermentation due to the change in temperature after harvest in the Swartland. Hoë-Steen is their third wine qualifying for the Old Vine Project (OVP) seal, celebrating the block’s fiftieth birthday this year. Whole bunch pressed, minimal sulphur during short cold settling for the juice before being racked to barrel for spontaneous fermentation (including malolactic fermentation). The wines ages from vintage to vintage in old 300 L French barrels. 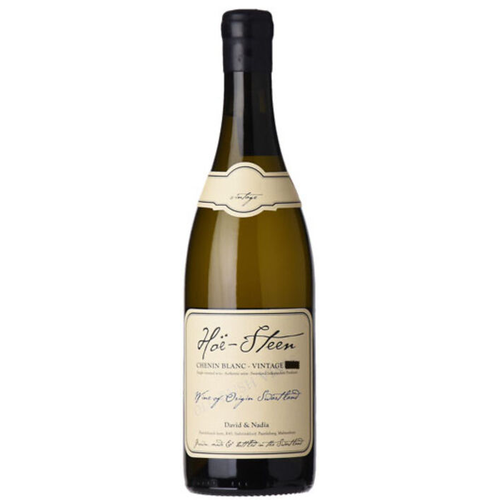