Vinous Reverie Notes
Jancis Robinson - Previous Vintage Wine of the Week
"Albariño is certainly in the news. See Australia’s Albariño isn’t and Albariño and Savagnin, Mencía and Jaen for some of the background to how Australia’s chief official source of vine cuttings has admitted that what it thought was the fashionable Albariño of north-west Spain is in the fact the Savagnin of the Jura.
I thought it might be appropriate therefore to recommend a textbook example of the real Albariño. As you can see from the 80 or so tasting notes I published last week as Spain’s frontiers – TNs, there is no shortage of decent examples of this lively, marine-scented white varietal grown in the Rías Baixas zone on the heavily indented, almost fjord-like Atlantic coastline of Galicia in north-west Spain.
But I was particularly taken by a couple of Albariños from the recently zarateoldrevived Zárate in the Val de Salnes. This, as you can see from the photograph, is a family firm dating back to 1920, but it has taken the current generation to really lift the quality of these super-pure wines. The rather academic winemaker is Eulogio Pomares, who studied in both Bordeaux and then Germany to investigate parallels between Albariño and Riesling. His first vintage was 2000 and he has steadily been upgrading technology but, mainly, improving quality in the 11 vineyards which they either buy from or own. Average vine age is an impressive 35 years and some are being planted, ungrafted, with a view to biodynamic viticulture. As in so much of this area, granite predominates.
There’s a lees-aged bottling Zárate, Tras da Viña 2005 Rías Baixas which is made from one 40-year-old vineyard and spent 30 months on lees and is certainly richer and creamier than the regular 2007. The 2005 is still very lively and would be great for those in the region who are a bit bored by the oceans of simpler versions available there. But I would argue that this richer version, and the increasing number of similar ones, actually mask some of Albariño’s most distinctive features and make a wine that is more like the international norm.
My recommendation this week is Zárate Albariño 2007 Rías Baixas, pure and unadulterated Albariño fruit that is strongly mineral and very focused and tight. Unlike some paler versions of Albariño, this wine should last well over the next two or three years, I think. It’s also impressively persistent. It is stocked by Indigo Wines in the UK, who are asking £12.30 for the regular bottling, £15.90 for the interesting 2005. Annoyingly, their website is currently being redesigned so you would have to enquire via ben@indigowine.com. The wine is also available at several US retailers, including the redoubtable K&L in San Francisco (who will deliver worldwide) as well as in Spain of course.
Brits seeking a decent Albariño available in mass distribution may care to check out the Castro Martin, Val do Salnes Albariño 2007 Rías Baixas currently sold by Marks & Spencer at £9.99. Just off a plane from London via Los Angeles, I was bearded at the carousel in Auckland airport recently by the guy who used to work in the British wine trade who now sells this, via Bibendum Wine. It’s a very decent example even if it lacks the sheer excitement and ageing potential of the Zárate 2007.
For wine geeks, here’s what Zárate say about their estate:
The winery is cultivating in this moment 6.54 ha which is dividend up in 11 vineyards in the villages of Sisán and Padrenda. These two villages are in the valley of Salnés, known for its poor organic soil, and sunny microclimate known as origin of the albariño variety. All of the family vineyards are planted with the grape Albariño. The plantation enjoys a very low density, with a square of 5 m x 5 m and an average of 800 plants per hectare. The harvest in the estate is between 6,000 and 8,000 kg/ha, which is below the permitted amount by the Rías Baixas. The rootstock most used in the estate are 196-17 de Castel and 110 de Richter, and less used are the 420 A and the 101-14 MG. The estate also has three vineyards with the original Albariño bases. The vineyards have an average age of 35 years old. The old vine vineyards we use a massale selection that we use in the replanting of our vineyards. Since 1994 our vineyards are not cultivated and do not use pesticides or herbicides. In the year 2006 we obtained the integrated production certificate."

As remarkable as the high quality and originality of Eulogio’s wines are, the most extraordinary aspect to his approach is his use of natural viticulture, a seemingly impossible feat in what is perhaps Spain’s coolest and wettest winegrowing region. In fact, Pomares’ farming is almost fully biodynamic—he works the soil manually, uses cover crops, and makes his own herbal “teas” for vine treatments. All new plantings are massale selections from the estate’s oldest vines. And, of course, fermentations proceed with only the indigenous yeasts. 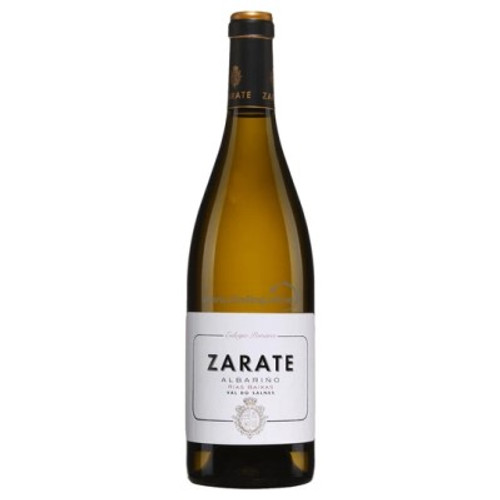