95 points Wine Enthusiast
"The aromas of freshly cut peel of Navel oranges and rose oil blend on the nose and promise intensity. The palate delivers this in a more slender, more elegant fashion than the nose suggests. There is a sinuous curve to that body and real tone, pulsing with lovely, tangy orange and bright lemon freshness. Whatever you thought about Traminer, it is put on its head here. Drink 2020–2040."

Karen MacNeil - The Wine Bible
"This fantastic and unusual wine is made from the rare yellow (gelber) traminer and red (roter) traminer, both of which are versions of the grape savagnin. Beautifully aromatic, the wine has what can only be described as dazzling citrus bitterness - as if the skins of perfect grapefruits, limes, kumquats, and oranges were transmuted into wine. The effect is at once cool, sophisticated, refreshing, and begging for Southeast Asian appetizers. The Umathum family has been growing grapes in Burgenland since the end of the eighteenth century, and began making their own wine in the 1980s."

Jancis Robinson - Founder Varieties
Savagnin is best known under that name in Jura, eastern France, where its wines have an attractive nuttiness and a particular affinity for producing the local speciality, vin jaune, that tastes a bit like an alpine sherry. A particularly popular synonym for the variety is Traminer, and the famous Gewürztraminer grape (often without the umlaut) is the aromatic, pink-skinned mutation of it. As Traminer it is particularly popular in Austria, Alto Adige in northern Italy (birthplace of the name, not the variety), eastern Europe and Australia. It turned out recently that cuttings sent to Australia from northern Spain and then disseminated to growers by the quarantine authorities as the fashionable north-west Iberian variety Albariño/Alvarinho are in fact Savagnin.
Umathum, Traminer, Burgenland, Austria 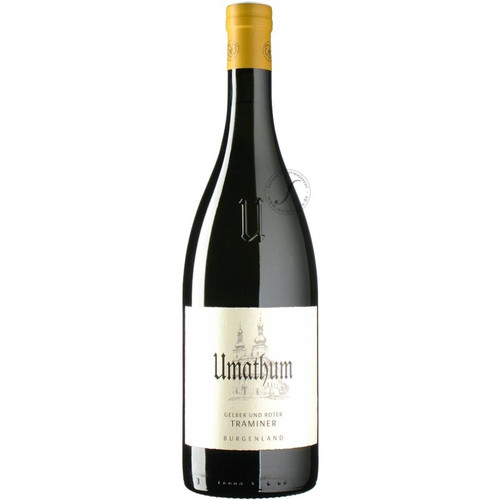