Vinous Reverie Notes
Importer: Although born in the sweet wine appellation of Sainte­Croixdu­Mont in France, Samuel Tinon has chosen Tokaj as the best place to grow wine and raise his three children. He’s also quick to remind us all that Tokaj was the favored drink and muse for Leo Tolstoï, Pablo Néruda, Honoré de Balzac, Gustave Flaubert, Diderot, and Voltaire, so he’s already in good company. As the first Frenchman to settle in Tokaj in the modern privatization era, he’s also convinced that Tokaj possesses all the same greatness as Bordeaux, Champagne and Burgundy. For the past 500 years Tokaj has demonstrated distinctive terroirs, ideally suited grapes, and unique winemaking styles that according to Samuel, feels “privileged to be part of the active reconstruction of such a Great Wine area…the backbone of a very rich life.” After consulting in Australia, Texas, Chile, Italy, traveling to the Jura and Jerez, and an additional 15 years just in Tokaj did he finally start his own production in 2000. What’s so compelling about his approach to farming, winemaking and representing Tokaj as a whole is that according to Samuel, “it’s hard to find a good balance between paradoxal parameters, like conservatism and modernity, action and inaction, convictions and doubts, choices with short/medium/long term, national and international. It is a permanent challenge with Nature and human relations. And it’s full of discoveries.” Keeping these sentiments in mind, his wines are among the most transportative, delicious and intellectual we’ve encountered. He also covers the entire range of traditional Tokaj from Dry Szamorodni, Sweet Szamorodni, Tokaji Aszú, and finally Eszencia. That said, what he makes in a given vintage is determined more by the conditions in the vineyard and the cellar than what the market wants. As Samuel says, “It is not I who is driving the wines, the wines are driving me!” Vineyards: Setting up shop in the village of Olaszliska just north of the village of Tokaj near the banks of the famous Bodrog River, Samuel farms roughly 5 hectares in this area (Határi vineyard) and an additional couple of hectares on the slopes of Mt. Tokaj. The soils on Határi have a 15 million year old volcanic base (tuffa, obsidian), broken up limestone and clay. With 10,000 plants per hectare (90% Furmint, 10 % Hárslevelű), and some as old as 90 years, no herbicides or pesticides are used and no tractor usage. Everything is done by hand. As arguably the first classified vineyard appellation system in the world, there is over 500 years of trial and error at work in the region. Tasting Notes: Olaszlizska is the largest village along the Bodrog River between Tokaj and Sárospatak and dates back to the 12th Century. Despite suffering through Ottoman times and a plague in the 1730’s, this village has been noted for top crus and famous wines for hundreds of years. The soil is riddled with volcanic stones and Nyirok (red clay) and planted mostly to the Hárslevelű grape. The Amici Vinorum Olaszliszka (Latin for Olaszliszka Friends of Wine) is the combined efforts of 10 local winemakers to reaffirm the historical identity and importance of the village. Sourcing from vineyards like Csontos, Határi, Meszes, and Palandor that date as far back as 1641, members of the association, much like Burgundy, are combining their fruit to produce one single “village” wine. The goal is to better understand the terroir, make a delicious wine, and perhaps more importantly, build and strengthen the wine community. Slightly off dry with incredibly high acidity, this Hárslevelű is both exotic, intensely textured, and has that undeniable volcanic vein of Tokaj running all the way through it. 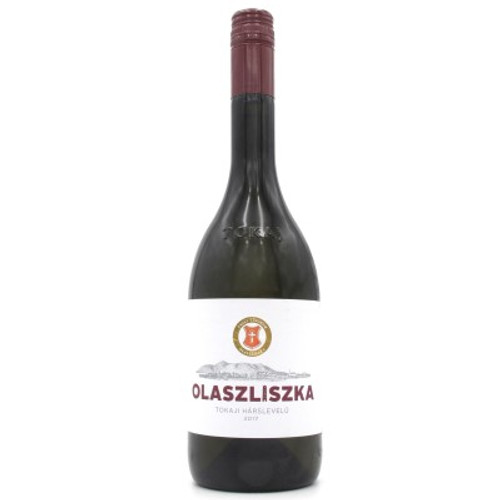