93 points Robert Parker's Wine Advocate
"This is the estate's entry-level Amarone that boasts a sweet, plush and accessible drinking profile. The 2015 Amarone della Valpolicella Selezione Antonio Castagnedi is a beautiful expression from a terrific vintage. The warmth and sunshine of the summer season is expressed beautifully in this blend of Corvina, Corvinone, Rondinella, Croatina and Oseleta with three months of appassimento. Black fruit and pressed cherry cede to barbecue smoke and baking spice. This is a great wine to recommend at this price point. Some 150,000 bottles were made."

92 points Wine & Spirits
After deciding not to make any Amarone in the difficult 2014 vintage, the Castagnedi brothers must have been pleased with the quality in Selezione, their flagship 2015. The fruit comes from mature vines, and they pick it slightly early to emphasize freshness and to keep the alcohol level around 15 percent. Even so, it’s a densely concentrated wine, loaded with notes of clove and vanilla picked up during two years in new French oak tonneaux. The spice notes give way to more savory tones as the wine opens up, the flavors picking up energy as they expand across the palate. For all of its bold spiciness, it finishes dry and balanced. Best Buy

92 points Jeb Dunnuck
"Aged 2 years in 500-liter French oak, the 2015 Amarone Della Valpolicella Antonio Castagnedi reveals a deeper ruby/plum hue as well as ripe, spicy notes of mulled red and black fruits, baking chocolate, dried herbs, tobacco, and cigar. Rich, medium to full-bodied, and beautifully textured on the palate, it's a nicely balanced Amarone that can shine on the dinner table or also be terrific at the end of a meal."

Vinous Reverie Notes
Amarone della Valpolicella is the most prestigious red wine of Veneto, and the four brothers who started Tenuta Sant'Antonio dedicate their primary Amarone to their father, Antonio Castagnedi. The best grapes from different vineyards are selected for this wine and are brought to the winery's drying room to undergo the appassimento process. After at least 3 months of drying, the grapes have shriveled and lost much of their water, while retaining their sugar, flavor, and other components. Once fermented and aged in new barrels, the Amarone is a powerful wine, yet fruity, fresh, and clean. 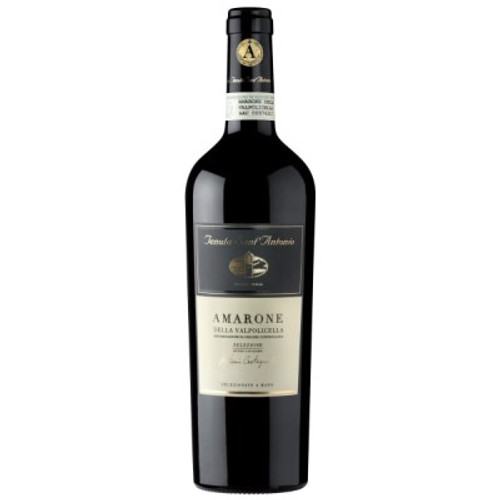