93+ points Robert Parker
"This red is a village wine from La Orotava. The 2019 7 Fuentes was produced with Listán Negro grapes with some 10% Castellana Negra from up to 25 different vineyards, mostly from the center and east of the valley where the grapes are mostly red, with vines ranging between 10 and 200 years old at altitudes of 300 to 700 meters on different soils, all volcanic but with more or less clay, silt and sand. It fermented with some 10% full clusters in concrete with indigenous yeasts and matured for six months, 60% in concrete and 40% of the volume in used 500-liter oak barrels, then blended and kept in stainless steel for a further five months. It has moderate alcohol, 12.6%, and mellow acidity. It showcases the minerality of the Orotava reds, with telltale aromas of volcanic ash, black peppercorns and dry roses. It has complexity that goes beyond an entry-level red. This is a wine that overdelivers for the price asked, and it is highly recommended.."

Vinous Reverie Notes
Jancis Robinson - Previous Vintage Wine of the Week
"It’s not news that Tenerife makes some great wines. Almost five years ago, Jancis wrote about The Canaries – where vines creep up on you and just a year ago Ferran wrote a thorough review of this particular island. But they are still in a rather small niche, and it’s the first time that a wine from Tenerife has featured as a wine of the week.
I tasted the Suertes del Marqués 7 Fuentes 2016 in early September while on holiday in southern France last year, supplementing my local wine purchases with some lesser-known Spanish wines courtesy of the excellent online retailer Vinissimus, recommended to me by a certain Mr Will Lander. (Though it looks as if they are currently out of stock of the 7 Fuentes 2016.)
It was hot in September so I had chilled the wine to pretty cool, describing it thus and giving it a high score of 17 out of 20:
‘Light cherry red. Very smoky and invitingly dusty on the nose, like crushed rocks. Tangy red fruit, more cranberry than anything sweeter smelling. Herbal and peppery too. Smells very fresh and it proves to be so on the palate. Juicy and fresh but with beautifully fine dusty tannins and that note of white pepper. Long and almost a little salty on its mouth-watering finish. Scented cool-climate impression. Light-bodied (even though the label states that the alcohol is 13%) but not in the least insubstantial.’
Wines enjoyed on holiday sometimes disappoint at home but not this one, which I tasted again a week ago. I enjoyed it at cool room temperature but even on a cold winter evening in London it was better lightly chilled, accentuating the purity of fruit and the peppery freshness all tangled up with that smoky, ‘volcanic’ beauty.
Jancis gives more background to the vineyards and location of Suertes del Marqués in her article on the Canary islands. One thing has changed since then: owner and winemaker Jonatan Garcia Lima (pictured below) is now working with Portugal’s Luis Seabra as his winemaking consultant. Seabra was the long-time head winemaker for Niepoort in the Douro before setting out on his own to make wines not only in the Douro but also in Vinho Verde country. (See my introduction to this Portuguese assortment.)
Garcia explained that 7 Fuentes, meaning ‘seven springs/wells’, is named after the village where they are based, and that the grapes for this blend of 90% Listán Negro and 10% Castellana Negra come from 25 different vineyards around Orotava (pictured below), partly their own vines and partly those of local growers. The label actually says 10% Tintilla but Garcia suggests this name was incorrect.
(As an aside for those interested in lesser-known grape varieties, our esteemed Wine Grapes co-author José Vouillamoz was reluctant without further research to confirm the identity of Castellana Negra because Castellana is a rather vague synonym meaning ‘from Castilla’. It is said in one 2009 paper by Vilanova et al, cited in Wine Grapes, to be Rufete and in a more recent 2012 paper by Cabello et al to be Tinta Cão.)
The juice is fermented in concrete tanks and aged for eight months in 60% concrete and 40% barrels and bigger foudres, with a proportion of whole bunches for some of the fruit, depending on the vineyard. There are no additions, no added yeast, and just a limited amount of sulphur after malolactic conversion and before bottling. It goes through a very light filtration just to remove the odd bit of grape skin, etc. It tastes and feels lighter bodied than the 13% alcohol stated on the label.
I suspect more people have had a holiday on the island of Tenerife than have drunk great wines such as this, but fortunately you don’t have to go there to enjoy it."

Roberto Santana and Jonatan Garcia refer to their 7 Fuentes as a village wine. The name is a reference to the seven sites in the DO of Valle de la Orotava, where they source the grapes for this cuvee. With a high percentage of old vines, it is a tremendous value and an exceptional introduction to the volcanic terroir found on the slopes of the very active, Teide. Mostly comprised of Listan Negro with a small amount of Tintilla, it is entirely fermented in small stainless steel tanks with indigenous yeast and a short, gentle maceration. About 20% of the cuvee is aged in neutral 500L French oak demi-muids with the remainder resting in concrete. 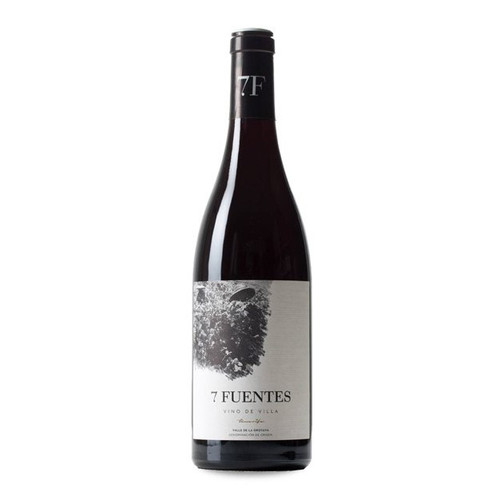