90 points Wine & Sprits
“The 2018 vintage yielded a pretty Riesling, full in texture yet brisk and fresh, with a crystalline clarity to its stony lime flavors. This is one to buy by the case.”
*Best Buy*

Vinous Reverie Notes
Jancis Robinson - Previous Vintage Review
"I’m having great fun at the moment tasting lots of German 2004s, on which I will be reporting in detail at the beginning of July. It’s a lovely vintage, much more attuned to Riesling’s special delicate qualities than the Ferrari vintage of 2003, with quite a bit of early appeal, especially at the lower ripeness levels, yet no baby fat or curious excesses of alcohol.
Some of the QbA wines, those made at ripeness levels below Kabinett and Spätlese and/or lightly chaptalised are looking seriously delicious already. Egon Müller’s is of course stunning, but then his wines are always stunning (especially so in 2004) and are always expensive. Here’s a producer who is not nearly as well known or celebrated but is really on a roll at the moment with a four-star rating in the new Gault Millau Guide to German Wines by Armin Diel and Joel Payne. Shamefully, the estate is hardly represented in the UK – although F & E May have imported a bit of wine over the years.
Nik Weis of St Urbans-Hof in Leiwen in the upper Mosel does however have reasonable distribution in the US, Canada, Switzerland, Belgium, Holland, Denmark and several Asian countries. He somehow manages to do all the marketing himself as well as looking after 33 ha/80 acres of vines – quite a sizeable estate for one in private hands in the Mosel – with Rudolf Hoffmann as obviously very competent winemaker. Most notable vineyards are Ockfener Bockstein and Piesporter Goldtropfchen. The estate incidentally has the associated Landhaus St-Urban restaurant. See more at www.urbans-hof.de
Care has to be taken to distinguish between their two QbA bottlings, one bone dry/trocken and the other in the increasingly popular off-dry feinherb style. The one I have tasted and was so impressed by was the latter, a wine with 10 per cent alcohol and 25 g/l residual sugar. (I have no reason to suppose the dry one is not good; I just haven’t tasted it.) I loved the balance on the feinherb wine with its wonderfully exciting, pure, racy herald of 2004’s virtues. It can be enjoyed already but should easily last through next summer too. I gave it 17 points out 20 for current pleasure – not bad for a wine that sells for 5 euros (£3 or $6) at the cellar door. It can be found for 5.50 euros from at least one German retailer. Once it makes its way across the Atlantic along the distribution chain it takes on a bit of dollar weight..."
Inspired by the “urban lifestyle“ of many cities like New York, London, Moscow or Paris, winemaker and globetrotter Nik Weis decided to express this approach to life and pleasure through wine. Just as all famous cities have a genuine character and flair, Nik also thought of a wine whose individual character would stand out the average mass of wines. His non-estate Mosel wine would never be a Riesling that could as well have grown anywhere else on the planet. 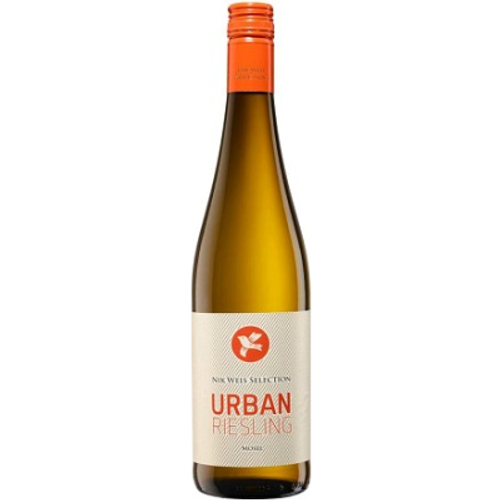