Jancis Robinson
"Lot number indicates this is vintage 2016. No fining, no filtration. With this wine David Barry Green, who once overlooked the Italian portfolio of Berry Bross seems to move further and further down the path of natural wines, but is too much a scion of St James oldest wine merchant not to care about elegance and cleanliness. Mainly Nerello Mascalese from the Contrada of Crasà on Etna, but labelled plainly 'Vino' without any further indication of origin.
Dark ruby. Something untamed and wild on the nose, like it was made in a palmetto, but this was tank fermented.  Blueberry and cherry on the nose with a whiff of garrigue. Perhaps this resembles the Nerello style mentioned in 19th documents both deeply coloured and yet not overtly alcoholic and exported in thousands of hectolitres to the rest of Europe at the time. Supple blackberry fruit on the palate and a bit alpine in its fruit aromas and with soft tannins. A great addition to the Nerello Mascalese style spectrum coming from Etna. 17/20 points. (WS)"

Vinous Reverie Notes
SRC is a small family operation located on the famous northern slopes of Mt. Etna on the island of Sicily, and takes its name from the first initials of Rori and Cinzia, and their daughter Sandra. As a double meaning, when you say the words SRC together, it sounds like the Italian phrase ‘esserci’ meaing: ‘we are here.’ The wildly active volcano has given the planet a remarkable place for unique, alive, and stunningly world-class wines. SRC began in 2013 with a small production of 3,000 bottles, and has steadily grown year-by-year while respecting their craftsmanship - creating five wines from about 17 hectares of Contrada (sites) between Solicchiata and Randazzo. The high elevation and steep slopes of Etna are full of tiny plots of terraced vines, fueled by fresh and rejuvenated volcanic soils that create truly one of a kind grapes, that arguably taste of its place more than anywhere in the world. The estate vines are located in 5 distinct districts: Crasà, Calderara, Rivaggi, Barbabecchi, and Pirao; all of which offer a unique quality to these biodynamically farmed indigenous varieties, with management of wild herbs and the help of local sheep. In the cellar, natural and slow fermentations, minimal intervention, old large barrels, and no sulfur use, create a small range of inspiring and delicious Etna wine.
The 2016 Mt. Etna Rosso comes from the rich volcanic soils of this mystical mountain, where the grapes can grow undisturbed for a very long time. The average age of these naturally farmed vines are around 70 years old, and the blend is primarily Nerello Mascalese, while being boosted with about 10% of other autochthonous varieties. After about a three-week natural fermentation in vat, the wine is aged for close to 12 months and bottled during the waning moon and without the use of any sulfur. The expression is nothing but pure and alive terroir, where the minerality of the volcano shows through from beginning to end. On the nose; crushed rock, bright cherry, and salty air shoot forth, giving way to a palate of chewy tannins and acidity that are lined with black cherry, walnut skin, mineral, and the raging fire that forged it. 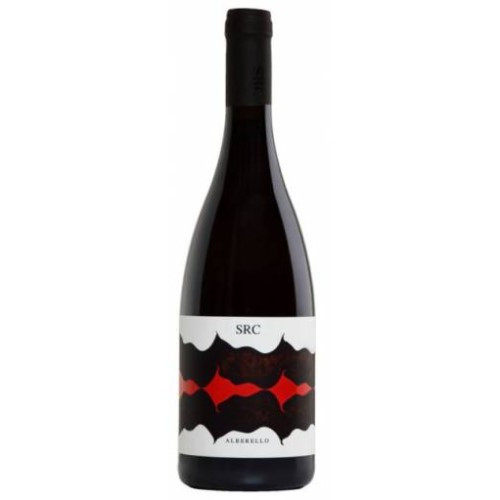