Spain is a country in the grip of vinous revolution with the most land under vine in the world. Extending from the Pyrenees that form the frontier with France in the north to the strait of Gibraltar in the south, Spain is a diverse country with distinct regional, cultural and viticultural differences. The country’s regional diversity is reflected in her wines, which range from light, dry whites in the cool Atlantic region of Galicia to heavy, alcoholic reds in the Levante and the Mediterranean south. Sample this diversity with the wines below.

Javier Revert, Micalet White 2016
93 points Robert Parker's Wine Advocate
"The white 2016 Micalet is named after a plot of old vines planted by Revert's great grandfather in 1948. The plot is on white, sloped soils and contains local varieties, mainly Tortosí and Trepadell, with some Malvasía, Merseguera and Verdil. All the grapes were picked together in mid-September and pressed with full clusters. The must started fermenting without the addition of any yeasts, and part of the fermenting juice was transferred to barrel, where it finishes and was kept without racking for eight months. The rest was put in glass demijohns once fermentation was over and kept there for eight months with lees. It has 13.3% alcohol and a pH of 3.07. He already made a micro-vinification in 2015, and the wine showed a strong personality. The nose is quite spectacular, with notes of fennel, hay and straw. There's also chalky minerality. The palate combines volume with vibrant acidity and a long, tasty finish. This is an impressive debut; truly outstanding. As the vineyard comes back to full production after being neglected for many years, there will be more grapes, and the quality should also improve."
Region: Valencia          Variety: Tortosi, Trepadell, Malvasia, Merseguera, Verdil

Maranones, Garnacha 2013
92 points Robert Parker's Wine Advocate
"The wine named after the winery and the quarter where the grapes are grown in San Martín de Valdeiglesias, the 2013 Marañones is pure Garnacha from three different plots in the quarter known as Marañones, one in the lower part of Peña Caballera and another two plots -- one flat and another one on slopes, all at around 800 meters and all north-facing. All reds here are fermented with full clusters in oak vats with indigenous yeasts and élevage in neutral, well seasoned and/or large volume oak, contained, looking for a slow oxygenation but no wood aromas or tannins. The wine shows the classical berry style of the wines from San Martín, with hints of blackthorns and some aromatic herbs. The palate shows very good balance, certain austerity from the late, cool vintage and the granite soils."
Region: Vinos de Madrid          Variety: Garnacha

Bodegas Ponce, La Casilla Bobal Manchuela 2016
93 points Robert Parker's Wine Advocate
“The style of the 2016 La Casilla is lighter and more aromatic and subtle than the 2015, following the character of the year, very mineral (wet chalk), long and tasty. It also fermented with 100% full clusters and indigenous yeasts and matured in well-seasoned 600-liter oak barrels. In a way, the nose made me think of a floral and mineral Gamay from Beaujolas. This is a great value. It's approachable now, but it should also develop nicely in bottle.”
Region: Manchuela          Variety: Bobal 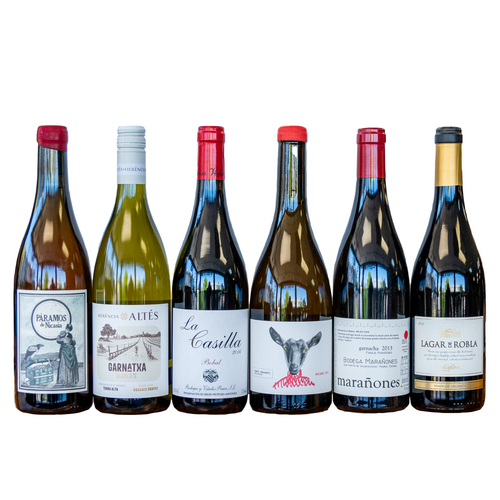