Jancis Robinson - Wine of the Week
"Here's an idea. How about a wine that is really delicious to drink? And uniquely expresses where it comes from?
As we have written time and time again, not least in our account of the Historic Vineyard Society, California is home to a disproportionate number of seriously old vines, many of them planted as field blends, and certainly not including such relatively recent favourites as Cabernet Sauvignon and Pinot Noir. These were typically and originally planted to slake nineteenth-century miners. Here is a wine that celebrates that heritage, a blend of seven or eight of the old favourite varieties that is designed to be expressly Californian and to be immediately ready to drink. Based on a solera that is refreshed every nine months or so, it contains wines declassified from the principal output of the Bedrock Wine Co.
Here's what is written on the back label: This wine is made from grapes sourced from the beautiful and diverse state of California. Grapes are hand picked, native-yeast fermented, aged in French oak barrels (a small fraction of which are new) and assembled into this wine with the same care and love as all of our wines. The hope is to make a delicious, perfumed and satisfying wine from top-quality grapes without too much pretension, marketing BS nor excessive budgetary duress on your part. I hope you enjoy it.
The multi-vintage blend is typically dominated by Zinfandel, California's signature grape, with old favourites Carignan, Petite Sirah, Mourvèdre, Alicante Bouschet, Grenache, Syrah and Barbera. For me, this is just the sort of wine California should be producing. And the price is a delightful contrast to the price of the state's more celebrated reds. I've tasted both the eleventh and twelfth cuvées and in the latter was delighted to find thyme and ripe black fruits with a hint of black pepper. 'Essence of California', I wrote, adding, 'Sweet, interesting, without tannins.' Tim tasted it recently at this Berry Bros & Rudd tasting and found it, 'Fresh and ripe and beautiful.' It is also notably long and absolutely ready to drink. It is also, bravely, stoppered by useful screw cap. At 14%, it's not light, but certainly doesn't taste heavy and jammy the way some Zins do.
The wine is the creation of Morgan Twain-Peterson, a founder member of the Historic Vineyard Society and son of Joel Peterson, whose own label Ravenswood (now sold) was based on his love and knowledge of Zinfandel. Joel was a speaker at the Zinfandel/Tribidrag conference in Croatia I reported on a couple of years ago. Twain-Peterson, seen below, managed that rare feat of being a full-time winemaker and qualifying as a Master of Wine in 2017..."

Vinous Reverie Notes
(46% Zinfandel, 40& Grenache, 5% Alicante, 5% Petite Sirah, 4% Sangiovese) "This is a delicious blend that is spicy and full bodied. It's a fun wine that is perfect for everyday drinking but also has some serious pedigree. The base for Shebang! comes 100+ year old vines from the Bedrock Vineyard." - Distributor Notes
"This is becoming one of the hottest red wine values in California. Made by Bedrock Winery’s Morgan Twain-Peterson, this killer offering admirably demonstrates what field blends of Mediterranean varietals and old vines can achieve in California..." - Robert Parker's Wine Advocate
"The Whole Shebang! is inspired by the Bedrock Vineyard, which was founded in 1854 by business partners and then-Californians William Tecumseh Sherman and Fightin' Joe Hooker, who were trying their hand at the wine country life--until troubles back east pulled them back into government service. Later, it was replanted by Senator George Hearst. Vintner Morgan Twain-Peterson makes this field blend styled wine from 55% Zinfandel, with Carignane, Petite Sirah, Mourvedre, Alicante Bouchet, Grenache, Syrah, Barbera, and a few aromatic white varieties. Many of these sources are old vines, making this one of our best bargains in heritage-vineyard California wine. Fun fact: Originally, Shebang! was released in a petite wine jug, with a handle, to emphasize its everyday drinkability." - Wine.com 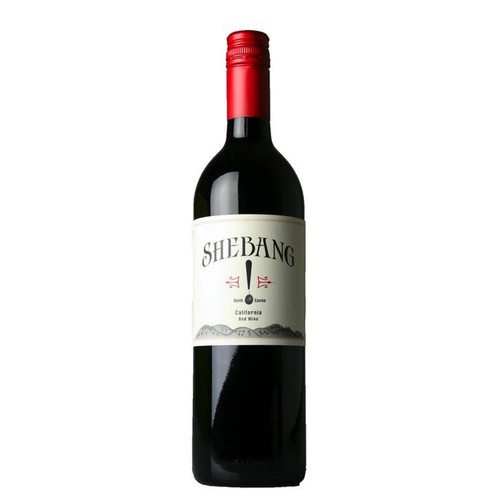