Jancis Robinson - Wine of the Week
"A thrilling, food-friendly white from the beautiful Greek island of Cephalonia.
Stony by name and stony by nature, Vino di Sasso (wine of the stone) comes from the limestone slopes of Mount Ainos – often spelt Enos, which is how it is pronounced – in the southern half of the the Greek Ionian island of Cephalonia (also spelt Kefalonia).
Mount Ainos is actually a range of mountains extending over 10 km (6 miles) across the island. Within the range, Mt Soros reaches 1,638 m (5,340 ft) and is the highest point on Cephalonia. The range gives its name, misleadingly, to the PGI that covers the entire island: Slopes of Enos. Misleading because although the mountains dominate the island, many vines are grown on the flat. The area delimited as the PDO Robola of Cephalonia, the source of the grapes for Sclavos, Vino di Sasso 2019, is in the centre of the island and on the mid slopes of the mountains up to 800 m. In the case of this wine, the vineyard really is on the slopes of the mountain, in Lacomatia at around 700 m (2,300 ft). You won't find Lacomatia on a map but the nearest village is Troianata, east of the capital Argostili.
It’s made exclusively from Robola grapes (above), one of the island’s key indigenous varieties and no relation to the Italian/Slovenian variety Ribolla/Rebula. It can produce simple lemony wines but grown in vineyards like this one, bush vines mainly on their own roots – phylloxera was not discovered on the island until the 1970s – and about 30 years old, farmed organically, it can produce powerful, fresh wines that are dramatically marked by their place of origin.
Vino di Sasso 2019 is searingly pure with a stony/mineral aroma and notes of fresh pears and citrus. It’s bone dry, a little bit salty on the palate, especially on the finish, mouth-wateringly fresh in an attractively sour way, long and taut. A high-wire wine but with lots of flavour. It has notable persistence and feels almost peppery in the mouth though I think this is more about texture than flavour. The alcohol is 13%. I scored it 17 out of 20 and thought it could age for 10 years from the vintage though Sclavos suggest seven years.
I have not tasted this wine with any bottle age but their Lacomatia 2016, from a small parcel of Robola vines in the same area, had started to develop gentle cedary notes, reminding me a little of mature Chablis, though winemaker Evaggelia Moraiti (pictured below with me during our barrel tasting) suggested that bottle-aged Robola can sometimes take on the character of some older Rieslings.
Vino di Sasso is made very simply: pressed under inert conditions (the variety is prone to oxidation), fermented in tank with ambient yeasts and bottled unfiltered with very low added sulphites.
Sclavos Wines, whose full name Sclavos-Zisimatos reflects its joint ownership by Evriviadis Sclavos (top left) and Spiros Zisimatos (top right) since 2015, is based in the west of the island on the Paliki Peninsula, which is where I visited them at the end of last month, taking a day out from a wonderfully relaxed holiday on the island.
The night before we took the ferry from the capital Argostili over to Paliki, there had been a dramatic storm, leaving us without electricity where we were staying in the south of the island. Fortunately it had not affected the whole island, as it had a week or so before when a ‘medicane’ struck and the entire island was without power for 24 hours. It was fortuitously restored just a few hours before we landed. They are seeing more and more storms and earlier in the year than usual, and many producers now have generators to cope with the sudden loss of power in the winery. Investment over the last five years at Sclavos has also allowed them to update the winery and experiment with concrete eggs, for example.
Owner-winemaker Evriviadis Sclavos and winemaker Evaggelia Moraiti taking a sample from one of their new Nomblot concrete eggs
Storms, and the resulting power outages, are not the only natural phenomena they have to contend with. The last big earthquake was in 2014 but, says Sclavos, ‘We are crazy because of earthquakes twice a month.’ Tremors are a constant, but strict building regulations enforced since the 1953 earthquake that destroyed almost every building on the island now mean that they seldom lead to damage or loss.
The Sclavos family has a long history on the island as well as a naval background. One branch of the family took a detour to Russia in 1700 to run a wheat distribution company, and in the 1860s, Evriviadis’s great-grandfather ran a big winery there, returning to Cephalonia after the revolution to plant their first vineyard, on the Paliki Peninsula.
They now own around 8 ha (20 acres) of vines in four different locations on the island. They also source fruit from growers with whom they have long-term contracts because vineyard land is expensive. Their own vines have been certified organic for many years and they achieved biodynamic certification from Demeter in 2019. All the fruit they buy is organically grown, apart from some they use for the entry-level Alchymiste range. All new plantings are based on cuttings from their own vines propagated at a nursery on the mainland.
I tasted the Vino di Sasso at the winery without food but later found it to be incredibly versatile at the table: it went well with the obvious choice of grilled fish (in this case both red snapper and sea bream) but it was a surprisingly good accompaniment to gemista (tomatoes and peppers stuffed with rice, raisins and pine nuts) and also courgettes stuffed with mince in a lemon sauce..." 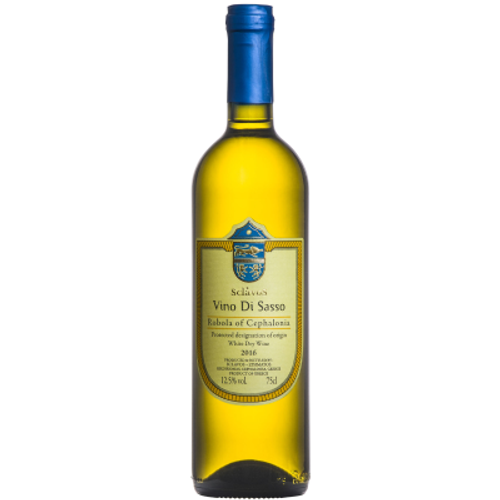