Jancis Robinson
"Very smart label, rather like the jacket of the latest World Atlas of Wine. 30- and 35-year-old vines. Jamie Goode and Daniel Primack involved with this winemaker (Eulogio Pomares). One vineyard right on the ocean. Made in chestnut and some concrete. Quite a warm vintage.
First bottle: Not quite the ocean tang on the end. Hint of sherbet. Seems a bit expensive though it's a little denser than the average Albariño. Ben Henshaw of Indigo was not happy with this bottle and I wasn't knocked out by it, initially giving it a score of 16 and suggesting a drinking window of 2019–2021. But he sent a second bottle that was seriously exciting. This bottle, one I have to assume is more representative, was much more intense and rich – really quite outstanding as an Albariño in fact – so much better than the first! There is real breadth to its impact on the palate (unlike so many Albariños) and a distinct sea-breeze quality to it, with impressive grip on the end. I shared what was left in the bottle with some friends and it was gone in no time. This is a wine to make me fall in love with Albariño again. 17/20 points"

Vinous Reverie Notes
Jancis Robinson - Wine of the Week
"Wine is a very fashion-conscious field. Various wines have their moment in the sun. I’m thinking of Jura being very sought after relatively recently. Grüner Veltliner having come into and then out of fashion. Pinot Noir seems to be having a long sunny period.
One wine that seemed to me to be suddenly fashionable about 10 years ago was Albariño from the damp, far north-west of Spain. There was a time when Albariño seemed like Spanish for white wine. I loved it at the end of the 2000s but gradually grew bored with it, not least because the wines became increasingly samey. With a few notable exceptions, they seemed to have lost their distinctive marine tang and I can’t remember the last time I bought or ordered one.
But I came across an example, Sal da Terra Albariño 2018 Rías Baixas, the other day that struck me as outstanding and it rekindled my admiration for the grape variety and the Rías Baixas denomination based on the fjord-like inlets into the Spanish coast in Galicia where top-quality seafood, whether local or shipped in from the British Isles, is standard fare.
The wine is well under 13% alcohol but there is real breadth to its impact on the palate (unlike so many Albariños) and a delightfully distinct sea-breeze quality to it, with impressive grip on the end. This is a dry white with ambition and structure that should give enormous pleasure over the next two or three years.
It is one of the wines I described on Tuesday in Indigo’s midlife solutions. Indigo’s founder Ben Henshaw admits that it was in answer to what he calls a midlife crisis that he felt the urge to be creative and set about initiating a series of joint ventures with wine producers in South Africa, Australia, New Zealand, Argentina, Portugal (including a particularly exciting white, Sanha 2016, from Dirk Niepoort’s Bairrada estate Quinta de Baixo that might have been my wine of the week if it were more widely available; Wine-Searcher.com finds it only at Nysa in London’s Fulham Road, at £19.10 – a steal).
Henshaw describes the background to this very handsomely packaged Albariño thus:
‘I have long been a believer in the potential and ageability of Albariño from top sites, illustrated in the wines of Eulogio Pomares of Zárate and a handful of other terroir-focused growers we work with. Knowing writer Jamie Goode and Zalto glass importer Daniel Primack were big fans of his wines, Eulogio proposed what became the Sal da Terra project over dinner in late 2017. The following spring they travelled to Rías Baixas to meet with Eulogio, visit potential vineyards and discuss the concept for the wine.
‘They chose two vineyards: a 35-year-old site on sandy granitic soils in Carballosa 6 km [3.7 miles] from the sea. The grapes from here were fermented and aged in a 1,200-litre chestnut barrel. The second was a 30-year-old vineyard at sea level next to the Atlantic in Castrelo near Cambados. Here soils are granitic with red clay. The grapes were fermented and aged in a large concrete tank. The two wines were blended in April after harvest and bottled in August.’
Seventh-generation, Bordeaux-trained Eulogio Pomares and his wife Rebeca are local stars as Albariño producers. Zárate has long been organic with preparations based on crushed shells and seaweed replacing agrochemicals. and Fento Wines, under whose auspices this wine was produced, is their personal project, based on local vineyards that are separate from Zárate’s own holdings. One of them, with its typical granite posts holding vines far above the ground in this damp, Atlantic-soaked climate, is pictured at the top of this article.
I should say that the first sample of this wine that I tasted was not outstanding; I assume because of a low-level cork failure. Henshaw, who knew how good the wine is, insisted on sending me a second sample that was unrecognisably glorious. I took the leftovers from my second tasting to a weekend house party and watched it being drained at record speed. And it’s mere coincidence that the label, designed by Henshaw, reminds me of the jacket of the new, 8th edition of The World Atlas of Wine…
This is the wine, whose name means ‘salt of the earth’, that has made me fall in love with Albariño again." 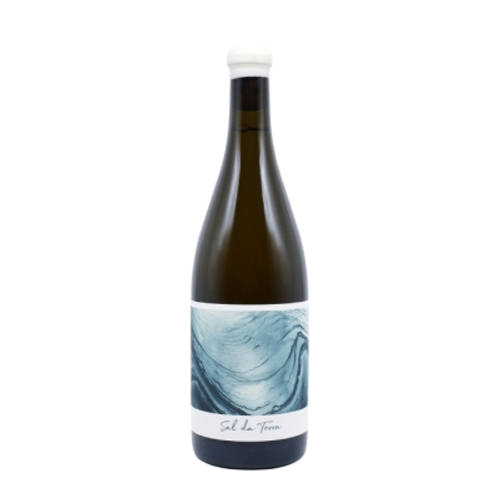