100 points James Suckling
"Stunning depth, power, purity and elegance. The blackcurrants and plums are fresh and intense on the nose with blueberries and gently herbal notes, too. The palate has a keenly articulated array of vibrant tannins that hold long, fresh and pure. It invokes a sense of wonderment at the finish. So long and so pure. This blend of 77% Cabernet Sauvignon, 11% Merlot, 7% Petit Verdot and 5% Cabernet Franc, is just at the start of a wonderful journey." (11/2018)
#7 on James Suckling Top 100 list

98+ points Vinous
"One of the highlights in this tasting, the 2015 Monte Bello will soon take its place among the greatest Monte Bellos ever made. Powerful, deep and explosive, the 2015 possesses magnificent concentration and richness in every dimension. Even with all of its raciness, the 2015 has terrific aromatic presence and regal tannins. The 2015 is a bit less showy than it has been in the past, but it was also just bottled two weeks before this tasting. Readers who own it will be absolutely thrilled."

95+ points Robert Parker's Wine Advocate
"At this early stage, the 2015 Monte Bello is all about potential. I followed a bottle over several days and only witnessed improvement. The wine unfurls in the glass with a rich bouquet of cassis, ripe plums, espresso roast, black tea and baking chocolate, lavishly framed by minty, spicy new oak—which is often at its most prominent at exactly this stage, when the wine is shutting down after bottling. On the palate, the wine is full-bodied, deep and concentrated, with rich, velvety tannins and beautifully succulent, even tangy acidity that lends amazing lift on the finish. The most obvious analogy is the 2005 vintage, though it also evokes a more elegant version of the 1995 Monte Bello. It's a blend of 77% Cabernet Sauvignon, 11% Merlot, 7% Petit Verdot and 5% Cabernet Franc that attained 13.5% natural alcohol. Since the wine appears to be shutting down, I'd recommend forgetting it until its tenth birthday. Given its structure and balance, it should enjoy remarkable longevity."

Karen MacNeil - The Wine Bible
"As structured, powerful, and impeccably balanced as a First Growth Bordeaux, the Ridge Monte Bello cabernet sauvignons are majestic wines. Opening one from a great vintage when it's young is almost criminal, for while the inky, dense, young version will knock you out with its flavor impact, older ones are mesmerizing. With a decade or more of age, Monte Bello unfurls into a hauntingly complex wine that is quite simply one of the greatest cabernets in the United States. For anyone who has tasted an older Monte Bello, it will come as no surprise that this was the wine that placed first in the thirty-year reenactment of the Judgement of Paris Tasting. Ridge was founded in 1959 by four Stanford Research Institute engineers, who still own it; the winery's famous wine-maker, Paul Draper, is still at the helm after forty years."

New York Times
"There are many commendable California cabs, but my favorite is Ridge Monte Bello, a Bordeaux blend from a vineyard in the Santa Cruz Mountains that’s predominantly cabernet sauvignon. This fall, the winery — which is best known for its zinfandels and is extremely selective when it comes to making its signature Monte Bello available — offered bottles of its highly rated 2015 online. I dug deep into my pocket and bought some. It’s a consistent classic. Sleek and balanced between the tension of its acidity and the richness of its fruit, the wine is deliciously drinkable now but also ready to hibernate for many years in your cellar. It is the perfect gift for a discerning wine lover who is not seduced by hype or cult." 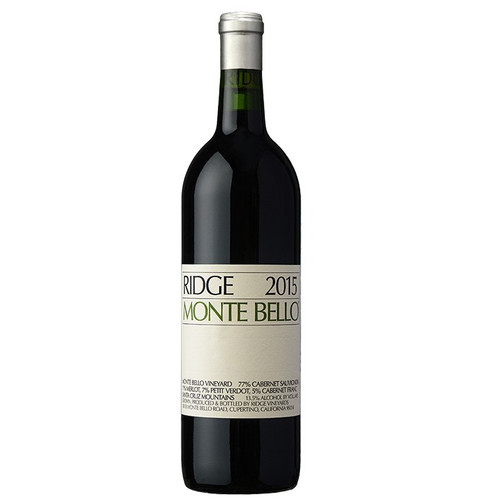