90 points Wine & Spirits
"This is so juicy and welcoming it would be easy to gulp it down without noticing the detail, but it’s worth taking in: With air the flavors deepen, taking on earthy, meaty qualities as well as floral notes. At $13, it’s a bargain."

Vinous Reverie Notes
Jancis Robinson - Previous Vintage Review
"I seem to be writing and talking a lot about South Africa at the moment – not because of any particular policy or because I have been there or even tasted a remarkable number of South African wines recently, but just because the country can offer such a variety of good value wine. Most New World countries can supply very cheap wine plus often overpriced bottlings at the top end. (California, Chile and Argentina spring to mind particularly here.) But the revitalised, post-apartheid winescape of South Africa seems to me to be fertile ground for wines that fall between these two extremes: seriously well-made, characterful, non-industrial bottlings taut with winemaker ambition but not overloaded in terms of price. I’m thinking of whites here at least as much as reds. South Africa produces more fine, age-worthy Chardonnays, concentrated Sauvignon and Semillon and unique old-vine Chenin Blanc (Forrest Meinert’s more Loire-ish wines and Rudera 2002 are particular favourites).
South Africa seems, almost miraculously, to be over its chronic shortage of red wine grapes and there is now in general a much gentler hand in the winery while processing these grapes. than there was until the mid to late 1990s. But tasted in isolation many South African reds have a particularly distinctive streak which some palates find distasteful – or perhaps just unusual. This was clearly illustrated last Saturday night at a tasting I conducted in Amsterdam where one of the wines was the highly regarded Sejana 2000 Merlot made by Winecorp with input from Alain Moueix of Bordeaux and Australian Graham Knox. There were roughly 300 palates in the room and most of them seemed to have a suggestion for how to describe this strange aroma, descriptions varying from ‘Pinotage’ to ‘minerals’ to ‘terroir’ to ‘drains’ to ‘the brown coal that used to be burnt in East Berlin’. Non South African tasters who often compare South African reds with reds from other countries will know what I mean.
Here is a South African red which does not share this characteristic, is extremely well-priced (I happen to think he could ask at least 50 per cent more for it) and with its grainy, refreshing finish should appeal to cosmopolitan palates. It’s a Cape answer to north Rhône Syrah: very gentle, early-maturing certainly, rich and lively, presenting a great big mouthful of fruit but without heaviness or an excess of either alcohol or tannin. (Nerd interlude: I happen to have been supplied with this wine’s vital stastistics which are alcohol 14.03%, residual sugar 2.1 g/l, total acidity 4.3 g/l, pH a whacking, don’t-try-this-at-home 4.13.) It’s made by Marc Kent of Boekenhoutskloof, South Africa’s leading producer of Syrah (although admittedly most other producers make Shiraz) who has real sensibility when it comes to vinifying this grape. One can see from the figures why he’s anxious to get this wine through the system relatively early but I urge you to benefit from its early charms when it is selling for as little as $8.99 in Florida and 8.40 euros in Friedrichsdorf, Germany according to www.winesearcher.com. The 2002 was good but the 2003 is even better – truly a wine that straddles the Old World/New World divide, easy to drink with or without food..." 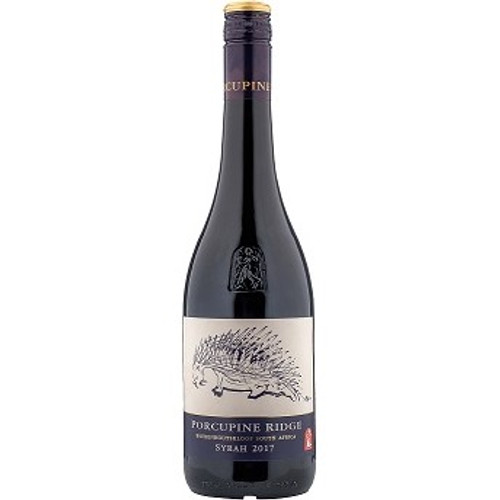