90 points Wine Enthusiast
"From a selection of fruit in top villages, this wine is lightly structured and concentrated. Red fruits are vivid and lively, bringing acidity and freshness to the wine. Drink now."

Jancis Robinson
"Tasted from a 5-cl mini sample bottle. 50-year-old Gamay vines.
Delicious! Spicier than Gamay normally is but still classically beaujolais. I was impressed with Piron's Beaujolais Nouveau recently, and am equally impressed by this delicious BJV. The fruit is violet-perfumed, precise, restrained but beautifully expressive. There's a long granite-powder streak of minerality, a touch of cumin and even a wisp of chilli flake. The finish is clear-cut, sappy and mouth-watering. VGV 17/20 points. (TC)"

Vinous Reverie Notes
Jancis Robinson - Wine of the Week
"I was surprised to realise, while tasting a slew of beaujolais last week, that it's been 19 months since we last had a beaujolais as wine of the week (which was Julia's, Dom de la Grosse Pierre 2018 Chiroubles), especially as the JR.com team are champions of this region that is often not taken as seriously as it deserves to be. But it wasn't that which made me decide to pick this delicious vin de soif. The wine, metaphorically, leapt out the glass at me, beaming, ‘Pick me! Pick me!’
With masses of fruit, remarkable fragrance and a mesh of fine tannins, it stood out particularly because it was ‘merely’ a Beaujolais-Villages. It’s widely recognised that the beaujolais crus are superior wines, but we’re often a little dismissive of villages-level and entry-level beaujolais. They’re produced in great volume and usually sold cheaply at supermarkets. They can be, well, unremarkable. This one was different.
I had a quick look online and found, to my delight, that it was only around £13 – ridiculously good value – and was fairly widely available. The one problem was that, for some reason, the US wine merchants seemed to be only stocking the 2019 vintage. Cheekily, I contacted Piron – would they be willing to send me a bottle of the 2019 to taste for our readers across the pond? Three days later, it arrived.
Happily, the 2019 was every bit as good as the 2020. Lip-smackingly good.
The Gamay grapes for Piron's BV come from the northern part of the region, vineyards in Lantignié, Lancié, Quincié and Salles Arbuissonnas. The vineyards are east-facing on sandy granitic soils with lots of small stones that store the sun's heat. The vines are an average of 50 years old and the grapes (100% Gamay) are hand-picked, selected on a sorting table and destemmed, retaining 20% whole-bunch. Fermentation lasts under 10 days and then the wine is aged in a mix of concrete and stainless steel.
The 2020 is slightly higher in alcohol than the 2019, at 13.5% v 13%. According to Julia's report in January of this year, 2019 was half the size of 2018 – 'a mild, dry winter, April and especially May were cool, with heat spikes at the end of June and July, a lot of rain at the end of July and early August, but a dry end to the season'. 2020 was also a small harvest, but with lots of ripeness thanks to a hot summer. Which probably explains the higher alcohol. Despite that, the two wines are marked by freshness and both are beautifully balanced.
The Piron family have been grape-growers in Morgon for 14 generations. Dominique Piron started making wine from his family's 10 ha (25 acres) and then established Maison Piron in 1988 so that he could buy in grapes to increase his production. In 2013, Piron went into partnership with Beaujolais native and winemaker Julien Révillon (in the main photo at the top of this article, by photographer Thvallier) who had spent a decade working in the Rhône. The aim was to modernise, raise the quality of the wines, and improve biodiversity and sustainability in the vineyards. Révillon brought with him another 7 ha (17 acres) of vineyards to the domaine. Currently they work with about 88 ha of vines (217 acres, in 140 parcels), some of which they own, some they lease and some they co-own with friends (10 ha in Chénas and 2 ha in Régnié).
Julia's trip to Beaujolais in 2018 firmly convinced her that the region is on an exciting upward trajectory in terms of quality and diversity and the fun that I had playing with food pairings with these wines firmly convinced me that they're right up there with the best table wines. As I said in my tasting note for the 2019, you simply cannot go wrong with a Piron BV!" 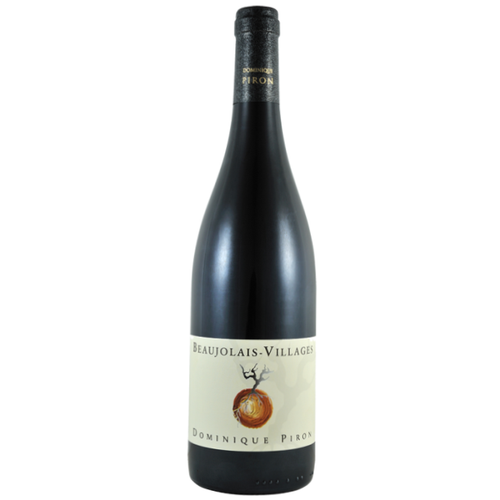