93 points John Gilman, View from the Cellar
"The 2019 Chinon “les Barnabés” from Domaine Olga Raffault is also raised entirely in stainless steel tank prior to bottling, and this single vineyard bottling is also made for earlier consumption, as befits its riverside vineyard planted on gravel and alluvial sands. The 2019 les Barnabés is also nicely cool at 12.5 percent alcohol and provides a more black fruity aromatic profile than the above, wafting from the glass in a youthfully complex blend of dark berries, cassis, tree bark, cigar ash, gravelly soil, smoke, a touch of spiced meats and a lovely topnote of juniper berries. On the palate the wine is pure, focused and full-bodied, with a fine core, excellent mineral drive and grip, suave, fine-grained tannins and a very long, vibrant and complex finish. While there is a bit of buried tannin here, this wine is already drinking with generosity and is very tasty, though it will easily last in the cellar thirty years or more! This is fine, fine juice. 2021-2050+."

Vinous Reverie Notes
Jancis Robinson - Previous Vintage Wine of the Week
"Chinon, in the middle of the Loire Valley, is pretty much synonymous with Cabernet Franc, one of those varieties you really hope will appear in a blind tasting. It might not be quite as distinctive as Sauvignon Blanc or Gewürztraminer but the best show the identifiable aromas of dark-red fruits, lead pencils and a certain leafy quality that is nothing to do with underripeness and all to do with the variety. Sometimes also a hint of violets.
But Olga Raffault, Les Barnabés 2018 is not just about the variety, it’s also about where it comes from. Chinon, along with Bourgeuil and St-Nicolas de Bourgeuil, between the rivers Loire and Vienne in the Touraine region (see the orange patch in the centre of this World Atlas overview map of the Loire), is a Cabernet Franc stronghold even if it’s not its birthplace, which is more likely to be in the Basque Country (as explained at length in Wine Grapes). It’s an important variety in Bordeaux of course but as a blending partner not as a star in its own right.
The variety has probably been flourishing in the Loire Valley since at least the mid 16th century, perhaps even in the 11th century, and in recent years has benefited from more consistent ripening thanks to the changing climate. (In cool years that leafiness and a very strong aroma of green/bell pepper can be much more extreme.) It thrives in both limestone-clay and sandy gravel soils to produce firmly structured, ageworthy wines mostly from the former as well as a lighter, more fragrant and flirtatious style from the latter (generalisation alert).
Les Barnabés comes from vineyards in the commune of Savigny-en-Véron (see this detailed map of Touraine’s Cabernet Franc hotbed) on the alluvial soils of the Loire and the gravelly soils of the Vienne. On the Chinon style spectrum, it straddles both styles, even if it is closer to the lighter end: fragrant and open with those defining aromas and yet with the definite fine tannins and fresh acidity to age well for at least five years in bottle.
At around 13% alcohol (the label states 12.5%), there's enough body and roundness to balance all those tangy fruits and enticing aromas. It’s a friendly wine but not a fly-by-night.
Founded by Olga Raffault and her husband Pierre, the domaine – as well as the family, and the great 1947 vintage – survived the premature death of Pierre in that year thanks to the work and commitment of Ernest Zenninger, a German prisoner of war and refugee who worked on the estate after the end of the war. The 24-ha (60-acre) estate is now run by Olga’s granddaughter Sylvie (main image above) with her husband Eric de la Vigerie and their son Arnaud.
Of those 24 ha, 23 ha are planted with Cabernet Franc and just 1 ha with Chenin Blanc. The vineyards have been certified organic since 2015. The winemaking for Les Barnabés, the lightest of their three Cabernet Franc wines, is straightforward, allowing the fruit and aromas to shine: the hand-harvested grapes are destemmed but not crushed and fermented in tank up to a maximum temperature of 26 ºC (79 ºF) – that's relatively cool for a red. It stays on the skins for four weeks to extract sufficient colour and tannins and is then aged on the lees in tank until bottling in the spring after the vintage. No oak.
I loved the way this wine brings together the lighter and the more serious styles of Chinon, making it delicious now, on its own or at the table, but also worth squirreling away for a few years for a more silky, complex version." 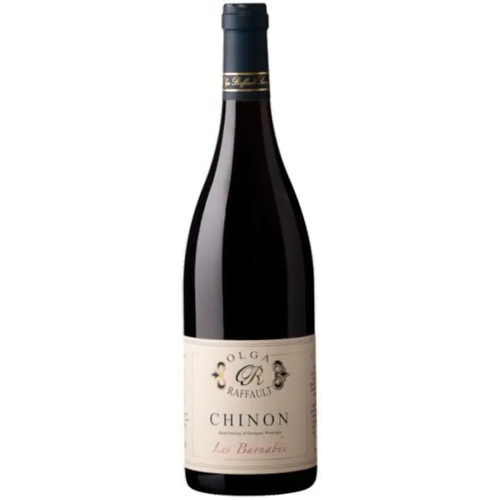