93 points Wine Enthusiast
"This is a class act. Fresh white breadcrumb and crisp, ripe red apple combine to create an appetizing nose. The lively fizz on the palate makes the tart but ripe red-apple notions stand out, painted against a mellow, yeasty backdrop and resonant, bready depth. This wine is crisp and rich in equal measure, bold and full flavored, yet elegant and smooth. Outstanding freshness, brightness and purity become apparent on the long finish."

91 points Decanter
"Doughy yeasty nose with a hint of salinity. The palate is soft and fruit-forward with some spice and biscuit notes. Great balance and finish. Drinking Window 2020 - 2024"

90 points Robert Parker's Wine Advocate
"The NV Classic Cuvée is a blend of 50-60% Chardonnay, 30-40% Pinot Noir and 10-20% Pinot Meunier. This particular cuvée is based on the 2013 vintage, augmented by contributions from 2010 and 2011, also 20% of the 2009 vintage. It spent three years on the lees. It has a generous bouquet with red apple, fresh pear and a touch of Mirabelle. I appreciate the vigor and intensity here. The palate displays fine delineation with hints of strawberry and cherry, nicely weighted in the mouth with a brisk and tensile finish. The Classic Cuvée has long given pleasure and it continues to do so."

Jancis Robinson
"Lot number LCCMV2191B10. 58% Chardonnay, 31% Pinot Noir, 11% Pinot Meunier. Vintages: 70% 2014, 4% 2013, 6% 2011, 9% 2010, 10% 2009, 1% 2008. Four years on lees. Disgorged May 2019.
Outstanding nose, with all the bready complexity of great sparkling. Saline and zippy, with excellent apple and lemon fruit on the palate. Not at all sharp, with excellent balance and flesh on the body. Mature, mushroomy character on the finish. Expertly done. 17++/20 points. (RH)"
Vinous Reverie Notes
Jancis Robinson - Wine of the Week
"Seventeen years ago, when Jancis featured a Nyetimber sparkling as her wine of the week, it was still very much a novelty. Back then, the estate was already at the forefront of English sparkling winemaking, and Jancis noted that it had been sold by its American founder to songwriter Andy Hill (in 2001). Five years later, it was sold again, to current owner Eric Hereema, and the wine has been made by Cherie Spriggs and Brad Greatrix since 2007 (see Nyetimber – a Canadian playground).
Since then, many of us have wondered how many millions have been ploughed in to this project, both as cash and as vines. After all, when I recently spoke with Brad and Cherie via Zoom, they told me that Nyetimber now has 327 ha (808 acres) planted, of which 260 ha (642 acres) are in production. Not a cheap endeavour. But remarkably, as production has increased, so has quality, and their multi-vintage Classic Cuvée (they dislike the term NV) is currently on astonishingly good form.
This is no idle hyperbole. The quality Nyetimber is achieving is almost too good, and I mean that quite seriously.
Since April 2018, Nyetimber Classic Cuvée has been reviewed in our tasting notes database seven times, with only one score below 17 (which was for a half-bottle). Jancis scored it 17.5 twice. The average score is far ahead of the non-vintage equivalents from Roederer, Bollinger, Pol Roger and many others. In fact, it's closer to Krug.
Having such outstanding quality from England's largest sparkling producer – as well as smart branding and passionate marketing support around the world – is a huge benefit to the general cause of English sparkling wine, helping it to become an incredibly successful category in its own right.
Tasting the Classic Cuvée last week reminded me of just how excellent Nyetimber is: it has all the delicious bakery and fresh-apple aromas of traditional-method sparkling wines, plus a wonderful earthy, mushroomy note. The high acidity gives it zip and salinity, but there is plenty of flesh on these bones, providing excellent balance (see my tasting note).
Spriggs and Greatrix told me some of the secrets behind the quality. Firstly, an extensive library of base wines helps. The bottle I tasted was comprised of 70% from 2014, plus back vintages dating back to 2008. Each year, they harvest 100 different parcels from their 11 sites across Kent,West Sussex and Hampshire. Furthermore, they divide each parcel into three different press fractions to ensure that they have a broad palette of styles and quality from which to blend.
Another factor is a technical, winemaking practice which they pioneered, using nitrogen to sparge the empty bottles at the point of tirage. Normally, oxygen is introduced at this stage, which is thought essential for nourishing the yeasts. But don't worry about the technospeak: the point is that the result achieves the 'magnum effect in a regular-sized bottle', according to tests they conducted with sparkling-wine expert Tom Stevenson. In other words, it increases complexity and longevity.
Again, this sort of thing can't be cheap, but it clearly reaps rewards.
So why is Nyetimber Classic Cuvée too good? There are two possible reasons. Firstly, the price of around £26 in the UK seems very low, which is perhaps a manifestation of the oversupply of English sparkling wine that has been forecast in recent years. The result is a quality-to-price ratio that far outperforms anything from Champagne – great for the wine lover, but perhaps not quite so great for an industry which needs to keep average prices high to remain sustainable and to start earning a return on all that investment.
(Or maybe, after a year in Singapore, home of the world's most expensive Nyetimber Classic Cuvée at SG$98 (£55, €60, $72), I am simply unaccustomed to such low prices!)
The second reason is that the rest of their range, which includes single-vintage and single-vineyard wines at significantly higher prices, look like far worse value. They are all great wines, but the normal expectation is to find more complexity, intensity and persistence in more expensive wines to justify the trade-up. Instead, the other Nyetimber wines I tasted alongside the Classic Cuvée (pictured above) might have been appreciably different – especially the demi-sec Cuvée Cherie, which is particularly good – but they weren't, to my mind at least, appreciably better.
Perhaps this is no bad thing either, since I'm sure the Classic Cuvée is the majority of their production, and getting the quality of that wine spot-on must be of primary importance. After all, Clos du Mesnil isn't that much better than Grande Cuvée, and that has never hurt Krug.
So, perhaps Nyetimber really is the Krug of England. Or should we say that Krug is the Nyetimber of Champagne? Either way, I cannot recommend this exemplary, delicious, flag-bearing English sparkling wine highly enough, at any price.
If you've never tried this wine, and are reading these words: you simply must." 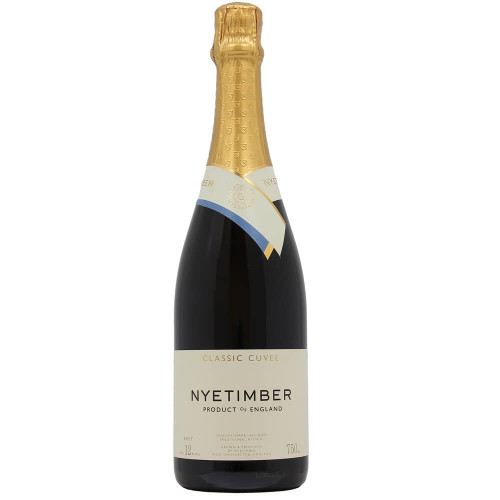