93 points Robert Parker's Wine Advocate
“The 2016 Planetes de Nin Blanc is a rare varietal of Cariñena Blanca, whose name is not allowed to be on the labels. They wanted a white with acidity, and they found it in this obscure variety, which they took from a handful of their old vines and regrafted onto 3,000 plants in the Planetes vineyard. It’s 13% alcohol and has 6.3 grams of acidity, always a refreshing and vibrant white with high minerality, notes of pollen, beeswax, fennel, Mediterranean herbs and something earthy. The grape is reductive, and they started using amphorae, but it didn’t go well, so they moved to used barriques. It’s serious, balanced and really fresh. 2,380 bottles were filled in April 2017.”

Vinous Reverie Notes
Importer: When Carles Ortiz first replanted Planetes in 1988 he chose the lower slopes of this site for Cabernet Sauvignon. Unhappy with the results, he an Ester regrafted these vines to a massale selection of Carinyena from their vines in Mas d’En Caçador. In the following years and much to their surprise, six of the newly grafted vines mutated into Carinyena Blanca. Recognizing the potential for the variety in the warm, dry climate of the Priorat they continued to graft this selection along with some additional massale selections of Carignan Blanc from the south of France. Now this lower section of Planetes totals 0.9 hectares. Starting in 2018, Carinyena Blanca has been authorized to carry the DOQ of Priorat. 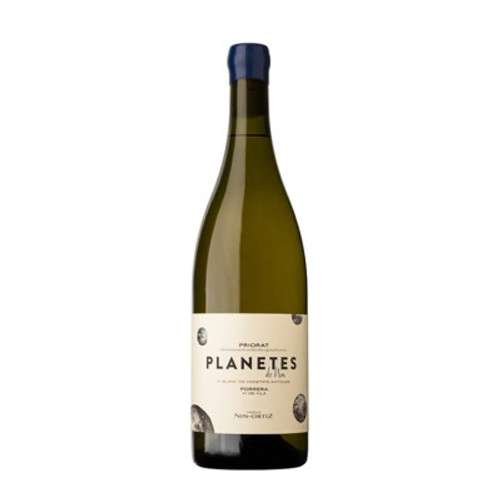