Jancis Robinson - Wine of the Week
"'The idea is to make wines that taste better and better the more you drink them.'
This is Douro producer Dirk Niepoort's explanation of a project that began in 2004 with a red wine under the name Fabelhaft (meaning 'fabulous') for the German market. He wanted to make wines in the 'Niepoort style': not heavy, not oaky, with 'Douro freshness and tannins'.
A white followed in 2010 and Jancis made the 2011 Branco her wine of the week back in 2012 and again in 2014.
After success with the red in Germany, the idea grew and the names proliferated, even if the wine remains the same irrespective of the local label. Within the company the wine is referred to as 'Fabulous' but see the end of the article for the list of names used around the world. Each witty, cartoon-like label is designed by a local artist in consultation with the importer to find something appropriate to each country.
I tasted both the Tinto (red) and the Branco (white) at last month's big Portugal trade tasting in London and both stood out for two things: their delicious, refreshing drinkability and their great value.
These are inexpensive wines that over-deliver not just in quality and flavour but also in that characteristic that so often disappears once a wine is made in quantity: regional expression. (Annual production is now typically 800,000 bottles of red and 100,000 bottles of white.)
This is achieved by picking early rather than late, choosing vineyards that are older and generally at higher elevations and thus on the cooler end of the spectrum in this region, and resisting the urge to add make-up or too much polish in the winery. 2017 was a year of drought and the grapes were all hand-picked between 10 September and 10 October – a shorter and more intense harvest than usual.
The Tinto is a blend of typical Douro varieties: Touriga Franca, Touriga Nacional, Tinta Roriz and some Tinta Amarela. The vines are mostly more than 35 years old, some as old as 80 years and therefore field blends of these varieties, planted on schist soils in the Cima Corgo subregion of the Douro Valley at elevations of 100–500 m (330–1,640 ft).
The grapes are destemmed and the wine is fermented in stainless-steel tanks for approximately a week. Around 15% of the wine is aged in used French oak barrels from Burgundy and the rest spends six months in tank. I gave the wine a score of 16.5/20 and described this dark-red-fruited well of pleasure as juicy and fresh, cheerful, bright and long. It's delicious already as the oak influence is subtle and the tannins very fine but there's absolutely no hurry to drink it. The 2016, which seems to be the current vintage on some markets, is just as fresh and fruity, with slightly lower alcohol than the 2017 red (13% v 14%), the tannins a little more silky after an extra year in bottle.
The Branco is a blend of Rabigato, Códega do Larinho, Gouveio, Dona Branca, Viosinho and Bical. Here too the vineyards, aged 15–50 years, are higher than most (550–700 m/1,800–2,300 ft) and therefore cooler to keep all the region's potential freshness and the local character.
Fermentation is in tank but, as with the red, around 15% is aged in older barrels and all of the wine is kept on the lees of the yeast until bottling to give more depth of flavour and roundness in the mouth. The 2017, which has a well-balanced 13.6% alcohol, is fresh, grapefruity and crisp, a touch herbal and with a lovely dry texture that is very slightly chalky on the finish, accentuating the freshness by a feeling of friction. Again I scored this 16.5/20 and see no need to drink it in a hurry even though 'drinkability' is its watchword. I'm confident it will still be delicious in a year's time." 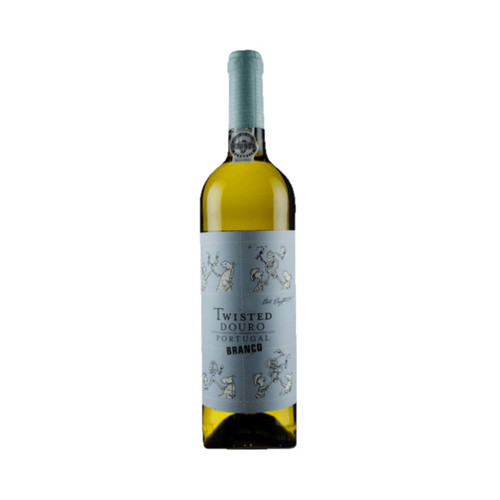