95 points James Suckling
"A lovely, juicy red with red tile, plums and spice. Some walnuts, too. So floral. Medium to full body. Extremely polished and beautiful in the mouth."

93 points Robert Parker's Wine Advocate
"There is more ripeness in the 2017 Unus than in the 2016 I tasted next to it. This feels younger and very fruit driven, juicier and with a softer texture, with volume and lush tannins. There is a balsamic hint here, powerful aromatics and a forward personality in this vintage, while keeping the composure and classical Mendel style, just a little more concentrated and ripe, but without excess."

Jancis Robinson
"65% Malbec , 25% Cabernet Sauvignon, 10% Petit Verdot. Malbec from Paraje Altamira, Uco Valley and from Mayor Drummond, Luján de Cuyo (vineyards 82 and 67 years old); Cabernet Sauvignon from Perdriel, Luján de Cuyo (vines 17 years old); and Petit Verdot from Mayor Drummond, Luján de Cuyo (vines 17 years old). Less oak than in the past. 60% new 400- and 600-litre barrels. 2017 was ‘a nice vintage with twice as much rain as usual, but less than 2016. And I love 2016 wines; they’re fresher than 2018’, says Roberto de la Mota.
Very fine and sophisticated on the nose. This is a beautiful wine in any context – a world classic. Already gorgeous but you know it will age beautifully. VVGV (very, very good value) 18/20 points."

Vinous Reverie Notes
JancisRobinson.com - Mendel Unus – an exceptional Argentine red
"Winemaker Roberto de la Mota and his business partner Anabelle Sielecki have been making their flagship Mendel Unus for 10 years now and at the end of last year I had the chance to taste the first nine vintages of this, one of my favourite Argentinian reds, which consistently manages to be both vibrant and refined, as elegant as it is intense. (The Mendel Malbec and their oaked old-vine Sémillon are also excellent wines.)
Roberto explained that the blend was practically the same from the first vintage in 2004 until 2009. Since then he has started to include a small percentage (currently about 10%) of Petit Verdot in the blend. When I asked about this change, he enthused: 'I love this variety. I discovered it when visiting Château Margaux in 1988 during my studies in France. A week after that, my father happened to spend a day with his friend Emile Peynaud and he told me about one so special barrel of Petit Verdot that they tasted. I imported this variety into Argentina in 1989 but we had only one clone certified in France. The clone 400 was good but with huge yields. For this reason I later brought some massal selection vines from Ch Margaux. I grafted those buds onto old Malbec vines here in Mendel's vineyard in Luján.' (See Jancis's recently expressed enthusiasm for Argentine Petit Verdot too.)
Their ungrafted, low-vigour vineyards, at an elevation of between 900 and 1,100 metres (2,950-3,600 ft) in Luján de Cuyo, were planted in 1928. The Malbec comes from Finca Mendel in Mayor Drummond and Finca de los Andes in Perdriel, the Cabernet from Finca de los Andes. The Petit Verdot is also from Mayor Drummond. The wine is aged in new Taransaud barrels for 14-16 months..." 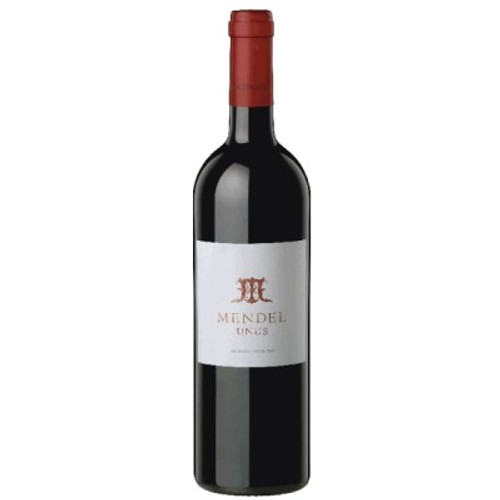