Jancis Robinson
"Full bottle 1,271 g. Certified Ecocert organic. 75-year-old Chenin vines on clay and flint. Hand-picked. 12 months in oak barrels on lees. No malo. RS 65 g/l.
Lime-pickle dry and sorrel sharp compared with so many of these much sweeter moelleux. This has the lime and stone and petrichor power of a Grosses Gewachs Riesling but with the underlying wax and lanolin and lazy-flower strata of Chenin. Hay, chamomile, pears cut from stone, stone carved from honey. A wine that, utterly, tastes of the earth. I feel as if I am licking late summer soil and cellar air and cellar stone steps in every lime-tangelo-candied-lemon-peel mouthful. The texture is wax thick, but the acidity is needle sharp. A fascinating wine. A sommelier could have so much fun with this! 17/20 points. (TC)"

Karen MacNeil - The Wine Bible
"In the first decade of the 2000s, expat American Peter Hahn restored by hand a rundown old stone house built in the 1600s, and the few hectares of clay-chalk vineyard surrounding it, naming the vine Le Clos de la Meslerie. Hahn's Vouvrays are massive, intense, very ripe, full-bodies wines, yet they manage to have an amazing tightness and through-line energy. And while energy may seem like an odd word, there's no better term for their explosive quince, citrus, honey cake, and minerally character."

Vinous Reverie Notes
Peter Hahn's Vouvray captures the unique terroir of its site overlooking the village of Vernou-sur-Brenne, located directly east of the village of Vouvray yet still situated within the appellation. The Clos de la Meslerie has a winemaking history that dates back to the eighteenth century, but when Peter Hahn acquired the estate in 2002, no wine had been bottled there for many years and it was in a sad state of disrepair. Peter diligently began renovating the dilapidated chateau and chai (wine cellar), and earned his oenology certificate while waiting for the existing sharecropping agreements on his land to expire. He regained control in 2007 and undertook the herculean task of revitalizing his poorly-tended vineyards. Peter’s care and patience were rewarded with an excellent first vintage in 2008, which received praise on both sides of the Atlantic for its freshness, balance and complex expression of fruits and minerals. Peter is a passionate practitioner of “natural” winemaking techniques, using organic and biodynamic practices in the vineyards, managing vine and grape growth manually, picking by hand and, most remarkably, using a meticulously restored decades-old basket press which extracts only “first-run” juice from his grapes. The result of this precision and dedication is wine of the very highest quality, true to its appellation and distinctive in its character, which we expect to become even more profound as he hones his craft over the coming years and his vineyards flourish under his strict organic regime.
He produces just one wine from his estate which, in its breadth and clarity, expresses the specific ‘terroir’ of the Clos de la Meslerie – effectively a single vineyard wine with a marked identity. As such, Peter declines to categorize his wines as Sec, Demi-Sec or Moelleux, in the belief that the critical definition is provided by the “Clos” which, over time, will declare its character. Over the past few years, the vineyard has tended to produce a wine that falls within the “Demi-Sec” category with residual sugar levels falling somewhere between 15 and 30 grams (chaptalisation is never practiced!). Harvest from the mix of 20 to 60 year old vines proceeds over several weeks in a series of “tries”. Only natural yeasts are used in fermentation and the wine is barrel-aged for twelve to eighteen months. Production varies between 4000 and 7000 bottles per annum. In classic fashion for fine Vouvray, the wines from the Clos de la Meslerie are excellent performers at the table, with a brisk acidity providing exquisite balance to the hum of delicately sweet fruit on the palate. Certified Organic. 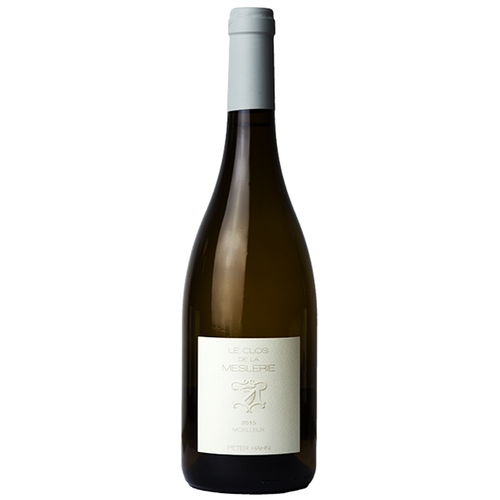