93 points James Halliday
“The tannins… have now largely resolved themselves… there is no question about the future of the wine, nor its abundant varietal fruits.”

91 points Wine Enthusiast
"Parts of Clare Valley are ideal for Cabernet Sauvignon, illustrated by this reasonably priced bottling. Mint and cassis show remarkable purity on the nose, while the palate is properly restrained without being hard or austere. That said, there are some dusty tannins on the finish, so drink 2020–2030."

Jancis Robinson
"Deep garnet. Minty blackcurrant aroma is clear but surprisingly subtle and the subtlety is increased by the beautifully fine tannin texture and a top note of crushed herbs. Still a little chewy on the finish though it’s already harmonious. A baby. 17.5/20 points. GV (JH)"

Vinous Reverie Notes
Jancis Robinson - Wine of the Week
"Ageing gracefully: one of the few aspirations that might be common to wines and to human beings.
This sometimes elusive quality is what I was looking for when I tasted just about all the wines from the 2013 vintage and older at the Australia Trade Tasting in London last month. This amounted to about 60 wines, on which I will be reporting, out of a total of more than 1,000 wines shown, as Jancis mentioned in London, capital for wine.
Kilikanoon, Blocks Road Cabernet Sauvignon 2013 Clare Valley stood out from the crowd. It seemed just right for drinking now but with at least another decade under the bonnet, depending on whether you like more fruit or more mature flavours in your wine.
After four and a half years in bottle, the texture of the tannins is now beautifully refined but there’s still plenty of lively blackcurrant flavours along with a subtle minty note and a seam of crushed herbs. You could just about drink it on its own but the tannins are pretty much al dente, making the wine quite versatile at the table, though I’d probably pair it with red meat or savoury pasta with lots of fresh herbs. The oak is very much in the background, and it carries its 14% alcohol lightly.
Winemaker Kevin Mitchell explained that they typically keep this wine at least two years after bottling and before release. They have just released the 2015 vintage at their cellar door in Penwortham. He added, ‘We feel the wines really benefit from some decent cellaring.’
Unfortunately, wine producers can rarely afford the cost of keeping their wines this long after bottling and few consumers have enough space or the right conditions – or the patience – to keep at home wines that are on sale now but are likely to offer even more pleasure when they are no longer in the first flush of youth.
The fact that the bottle is closed with a screwcap (the smart version where you can’t see the thread from the outside) has certainly not stopped it from gently maturing but the closure may have contributed to the fact that there is still so much lovely pure fruit in the glass.
The Blocks Road cuvée is a blend of dry-farmed fruit from two vineyards in the southern part of the Watervale subregion of the Clare Valley, South Australia, which may be more well known for Riesling. Although daytime temperatures are usually warm, the nights tend to be cooler, slowing down ripening so that the tannins ripen at the same time as the fruit flavours.
Mitchell purchased his Blocks Road Vineyard in the late 1990s. Cabernet Sauvignon vines (clone unknown) had been top-grafted onto Grenache vines planted in 1947. About 30% of the blend is from another grower’s 20-year-old vineyard nearby, also dry-farmed.
The fruit is hand-picked, fermented in small open-top fermenters, then basket pressed to French oak barrels, 30% new and the rest between one and four years old, where it ages for 16 months. The wine was bottled in October 2014 without fining or filtration." 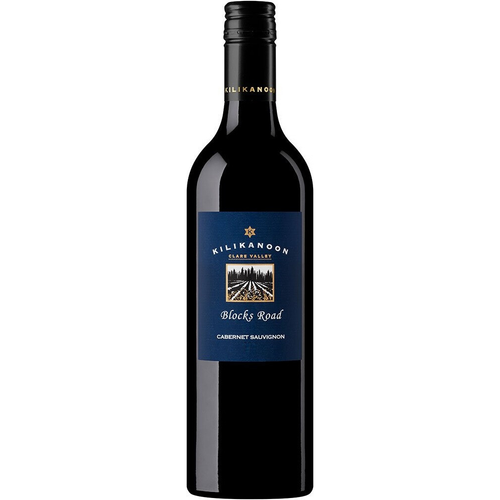