Vinous Reverie Notes
Importer: The Kasnyik family is one of the founding members of the “Autentista Slovakia” association that has now grown to include 5 producers including Slobodne Vinarstvo, Magula, Matyas, and Strekov 1075. The association has a detailed Charta and strict guidelines on farming, cellar practices, and how to ultimately restore and preserve the culture of wine along the Danube. The area is very much a crossroads in Central Europe and the epicenter of winemaking in Slovakia. Strekov was first mentioned in 1075, but has more recently been influenced by the Kingdom of Hungary, the Austro-Hungarian Empire, the Ottoman Empire, Czechoslovakia, and attempted Germanization by the Nazi’s. It became independent after the Velvet Revolution in 1989. Brothers Gabor and Tamas along with Gabor’s wife Virag are emblematic of this sentiment. Coupled with the aforementioned Autentista Slovakia, the Kasnyik family is involved with, connected to, and invested in the success of Slovakian wine as a whole. Founded in 2004, real change came in 2008 when they began firmly transitioning to organic farming with a focus on native grapes fermented and aged exclusively in oak. The COOP era had left many of the best vineyards largely forgotten, the rest farmed industrially, and native grapes and winemaking traditions were ripe for resuscitation. Keeping all of this in mind, their overarching goal is to bring back the unique wildness that is the connective genius loci of their region.
Rizling means Welschriesling/Olaszrizling unless you specify otherwise. It’s one of the most widely planted grapes in the Pannonian basin and you can find it ranging from Eiswein, sparkling, 2 liter plastic bottles at the supermarket, age-worthy dry wines, and increasingly as a great candidate for skin maceration. Hand picked and destemmed, Gabor spontaneously ferments on the skins in open vats until the cap falls. It’s then barreled down on the lees for as close to the next harvest as possible. He doesn’t like having empty barrels. Bottled unfiltered with a small addition of SO2. 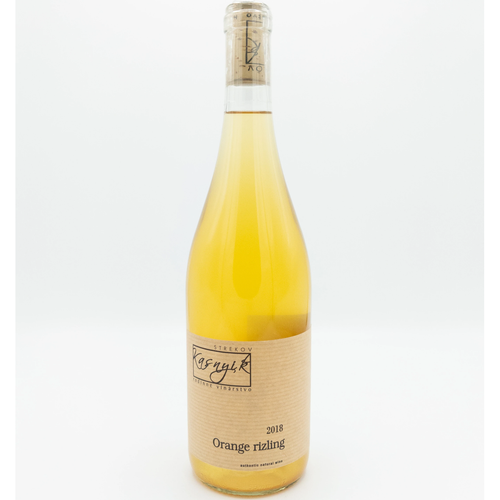