92 points Vinous
"Strawberry and quince preserves on the nose anticipate the jammy ripeness and honeyed aura exhibited on a glossy, glycerol-rich palate. At the same time, though, there is a juicy fresh-fruit side to the strawberries and a stimulatingly seedy crunch. An alluring inner-mouth influx of honeysuckle and lily-of-the-valley perfume contributes to the buoyant, almost ethereal impression of an impeccably balanced, bell-clear, at once soothing and tingling finish."

Vinous Reverie Notes
The Christoffel family of Ürzig has been involved in wine production dating back to the 17th century. All of Christoffel’s 4 hectares comprise the Ürziger Würzgarten and Erdener Treppchen, including a very special parcel directly above (and contiguous with) the 2.2 hectare Erdener Prälat. Cultivation in these sites has been recorded as early as the 7th century and has for centuries been prized because of its southern exposure, deep Devonian slate, and steep gradients. The Ürziger Würzgarten, or ‘spice garden,’ is so named because it’s iron-rich slate is red, and produces notably spicy wines. With its gradient of 70 degrees, the Würzgarten is incredibly difficult to farm, as is the Erdener Treppchen, immediately adjacent to the Würzgarten. Because of the sheer steepness of these sites, the majority of Christoffel’s plantings are over 100 years old and on their original rootstock. The star system on Christoffel’s labels represents specific parcels, which are vinified separately. 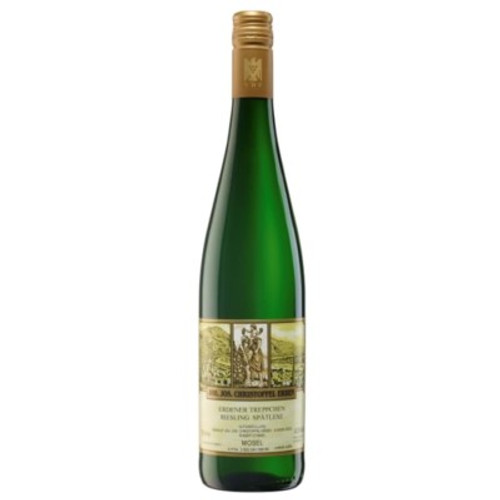