Jancis Robinson
"This is their regional Kékfrankos, 10-year-old vines. Zoli Heimann describes it as ‘a wine that represents a very strong picture of our warmer climate, the loess soil, a round, approachable style. I’ve always felt that this region was underrated because it doesn’t have schist or volcanic soils, but I’ve come to appreciate loess because it gives friendly aromatics. It is a vin de soif for interesting people – complex but very drinkable.’ From young vines and a bit of the first crop from newly planted vines. They do about 30% whole bunch. Natural fermentation. Half is made in big old barrels and half in stainless steel. Foot-trodden twice a day and then eight months in used oak. ‘We are not aiming to do a big red wine. I really think that Kékfrankos shows everything it has at 12 to 13% alcohol and I don’t want ripeness for the sake of ripeness. I want phenolic ripeness and flavour.’ RS 2.1 g/l, TA 5.4 g/l.
I don’t think there is a better description for this wine than vin de soif. A wine that really does make you thirsty for the next sip! (The next glass!) It has the quiet charcuterie-like meatiness of Cinsault on the nose along with woodsy florals and tomato vine. It tastes of bramble berries picked from late-summer hedgerows, warm from the sun but with the leafiness and fragrant earthiness of footpaths and damp grassy banks and wild herbs. So mouth-watering and so gentle. 16.5/20 points. GV (TC)"

Vinous Reverie Notes
Importer: The Heimann family has been pioneering in bringing many clones of Kadarka (and some Kékfrankos as well) back to life from the verge of extinction during Communism. This is a grape that once covered over 60,000 hectares in Hungary was less than 400 hectares in the early 1990s. Vineyards: The Szekszárd appellation was originally established by the Celts, flourished under the Romans and survived Turkish occupation due to the high tax revenue the wines generated. Once the Turks were pushed out, modern day Serbians were being pushed north by said Turks and brought the Kadarka grape with them. the very wine savvy Swabians were also incentivized to resettle the area. Where the Serbians brought a key red grape, the Swabians brought superior winemaking skills. Their influence is still felt today. Case in point, the Heimann family is intensely proud of their Swabian roots and have been making wine here since 1758. Up until this point, the appellation was almost entirely white wine. Since then, Kékfrankos and a variety of Bordeaux varieties have taken firmly to the region. They survived under Communism while many of the native white and red grapes did not fair so well, namely Kadarka. Heimann farms roughly 23 hectares spread over the Baranya, Porkoláb and Iván Valleys in addition to some rare hillside plantings on Batti. The soil is overwhelmingly loess in Szekszárd, but you can also find Terra Rosa (iron rich soil also dominant in Istria, Croatia) if you get deep enough. If you’re approaching the appellation from the Great Plain to the East, you first hit the River Danube and then the first hills are Szekszárd. It’s a fairly dramatic change in the landscape and an obvious place for multiple exposures. Currently most plantings are Kékfrankos. Tasting Notes: Kékfrankos is sourced from younger vines in the Baranya-völgy and an exciting virgin vintage from the Csötönyi-völgy single vineyards. There is texture and grip along with fruit and earthiness to balance. This is a quintessential table red for the appellation in the best way possible. 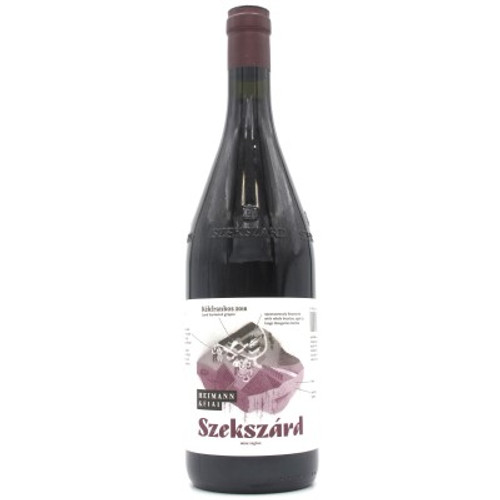