Vinous Reverie Notes
Jancis Robinson - Previous Vintage Review
"Their regional/estate ('birtok' in Hungarian) Kadarka. A classical style to show off both the variety and the region. Clone P9 from Iván-völgy P123, P111, and P147 from Porkoláb-völgy. Harvested end of August and into early September. They pick all clones separately and vinify separately in small lots. Some whole bunch. Natural fermentation and it goes through spontaneous malo: ‘Kadarka just seems to go naturally through malo very fast’. Made in concrete amphora. 100% carbonic maceration. They do a skin-contact fermentation but only for 7–10 days because if it goes on for too long, the very thin, tender skins of Kadarka fall apart and the wine becomes very turgid and then they have to work with a lot of gross lees. Aged for six to eight months in 1,000- and 5,000-litre old barrels. RS 1.3 g/l, TA 5.5 g/l.
Clear ruby-turning-garnet colour. Smells of fresh mushrooms and cranberries and pepper. Delicate, sweet, translucent fruit, gossamer-fine tannins and yet there is an intensity on this wine – like finding the imprint of a fiercely scribbled poem on the under-page of a notepad. It seems to be made of dragonfly wings, with that shimmering, iridescent quality of beauty. You could drink this every single day! A wine that seems to embody kindness, gentleness but also soul fire. 17/20 points. VGV *very good value* (TC)"

Importer: The Heimann family has been pioneering in bringing many clones of Kadarka back to life from the verge of extinction during Communism. Vineyards: The Szekszárd appellation was originally established by the Celts, flourished under the Romans and survived Turkish occupation due to the high tax revenue the wines generated. Once the Turks were pushed out, modern day Serbians were being pushed north by said Turks and brought the Kadarka grape with them. the very wine savvy Swabians were also incentivized to resettle the area. Where the Serbians brought a key red grape, the Swabians brought superior winemaking skills. Their influence is still felt today. Case in point, the Heimann family is intensely proud of their Swabian roots and have been making wine here since 1758. Up until this point, the appellation was almost entirely white wine. Since then, Kékfrankos and a variety of Bordeaux varieties have taken firmly to the region. They survived under Communism while many of the native white and red grapes did not fair so well, namely Kadarka. Heimann farms roughly 23 hectares spread over the Baranya, Porkoláb and Iván Valleys in addition to some rare hillside plantings on Batti. The soil is overwhelmingly loess in Szekszárd, but you can also find Terra Rosa (iron rich soil also dominant in Istria, Croatia) if you get deep enough. If you’re approaching the appellation from the Great Plain to the East, you first hit the River Danube and then the first hills are Szekszárd. It’s a fairly dramatic change in the landscape and an obvious place for multiple exposures. Currently most plantings are Kékfrankos with smaller amounts of Merlot, Cab Franc, Tannat, Sagrantino (from Umbria!) and now more than ever replantings of Kadarka are underway. Tasting Notes: Think old school Poulsard albeit with Hungarian herbal cherry and spice. This is a light refreshing red in a whole new category. 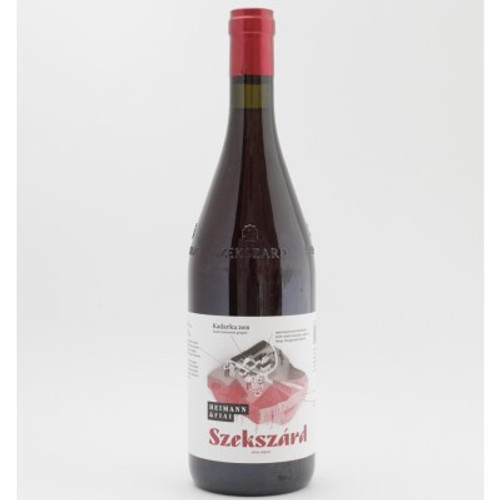