Jancis Robinson
"80% Assyrtiko, 20% Aïdani. Very ripe grapes dried in the sun for 15 days. Clarification and fermentation of the concentrated grape must with selected yeasts for 3 months in stainless-steel tanks under controlled temperature of 20–22 °C. 16 years in used French oak. TA 10.54, pH 2.95, RS 350 g/l. Total production 6,000 half-bottles.
Brown in colour with a greeny/ochre rim. Insanely intense aroma of figs and prunes and dried apricots, and a lifted character from the high VA (1.83 g/l). The aroma alone is intoxicating. Viscous, incredibly sweet and intense like liquidised prunes, the darkest of marmalade that still has a bitter orange note. Incredible that a wine so sweet can still have a fresh and refreshing aftertaste (note the pH and the RS). Outstanding intensity and deeply viscous. You could make one sip last all night, the aftertaste is so incredibly long. Outstanding wine. Even better with strong, hard cheese. Take your time with this wine: it deserves your full attention. 18.5/20 points. (JH)"

Vinous Reverie Notes
Winery: Vinsanto - 16 years aged in oak barrels. White wine that is naturally sweet, Assyrtiko 80%, Aidani 20%. Tasting Notes: Deep amber color with toffee shades, intense dried fruit aromas such as raisins, honey and butter caramel of mineral character. Full and velvety mouth with a sweetness that balances the refreshing acidity. Long aftertaste of candied orange peels. Food Pairing: On its own or paired with bitter chocolate, oriental sweets but also with foie gras and strong cheeses, Roquefort. It can be aged for more than 30 years.
A few words about Vinsanto. On the island of Santorini, which is referred to by foreign travel guides as Greece's best vine region, a sweet wine was produced and continues to be made from sun-dried grapes without any added sugar or alcohol, and aged for at least 2 years in oak barrels. It is the most authentic continuation of 'passos' sweet wine as the ancients used to call it, which the islands of the Aegean Sea are famous for. During the Middle Ages merchant, crusader and worshipper ships on their way to Constantinople, to the ports of the White Sea, the Venetian markets and to the Holy Land supplied themselves with this sweet wine by stopping off at Santo Erini-Santorini, as the ancient volcanic island of Thera had been baptized, most likely by Italian sailors, during the Dark Ages. The 'passos' of Thera took the name Santo from the first component of the island's new name. This name became vino di Santorini - vino Santo, Vinsanto during the years of the Frankish occupation in the Venetian markets and across the eastern Mediterranean. This name - in Greek 'Βινσάντο' - has survived until today. It simply means: wine of Santorini, and stands for the island's traditional sun-dried wine. And so it is a 'historical name of origin' and one of the very few that have remained 'alive' and is now protected in Greece. It is a naturally sweet VQPRD (vin de qualité produit dans une region determinée) of Santorini and, in other words, is produced from the island's white varieties Assyrtiko, Aidani and Athiri. The wine owes its colour to the grapes' exposure to the sun for 12 to 15 days and also to its ageing in oak barrels.
Why do we age our Vinsanto for 6 years at Hatzidakis Winery? Regulations concerning Vinsanto make it clear that it is compulsory to age the wine in oak barrels for 2 years. Behind the 6-year ageing process of Hatzidakis Vinsanto hides a little story ...which Konstantina's mother used to tell her children. Konstantina Chrysou Hatzidakis' grandfather, Iakovos Zorzos, was a viticulturalist. He had his own 'canava' (winery) in the northern part of the village of Pyrgos Kallisti where he made his own homemade wine just like most of the families on Santorini did. He had 12 children with his wife Margarita. Each time one of their children was born, they wrote the name of the child on the Vinsanto barrel of that year. When the child reached 6 years of age they would open the barrel and drink the wine. Charidimos and Konstantina did the same thing. When their daughter Stella was born it was the first year of production of the Hatzidaki Vinsanto and when she turned 6, in 2003, they bottled their first Vinsanto and put it on the market! In this way they kept the family tradition going and they discovered that their grandfather must have known a little secret because after 6 years of ageing in oak barrels, the wine acquired a particularly unique character and a wonderful colour. 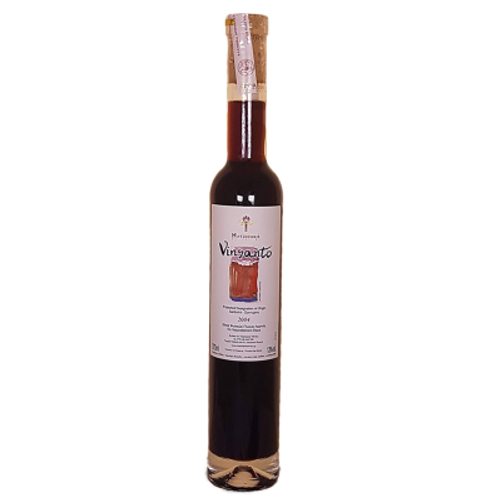