93 points Robert Parker's Wine Advocate
"The 2016 Telescópico Cariñena was destemmed and fermented in an open vat, then aged in second use 500-liter French oak barrels for six months. It's incredibly floral and elegant, very aromatic and open, a Cariñena without heat, very direct, with energy and great aging potential especially when you see the electric freshness in the palate. This shows that elegant rusticity is possible. 4,350 bottles were filled in February 2018."

Vinous Reverie Notes
Importer: We get blind solicitations from wineries literally every day, but this one caught our eye immediately, because it was penned by none other than Maria José López de Heredia. She said, " if there is one person in the wine world that I could recommend it is Fernando Mora, because he gives me hope for the future of the world of wine in Spain." In his own words, this is what Fernando does : " recovering old vineyards in Valdejalón area in the north east part of Spain. Producing single vineyards garnachas from old vines up to 98 years old. Something we are very proud to do." With his two partners, Mario López and Daniel Latasa, they style themselves the “Garage Winery”, that being a literal description of the facility in which they craft their wines. Oh, and Fernando just became a Master of Wine, earning special distinction for his treatise on the Garnacha in Campo de Borja. The little-known region of Valdejalón, centered around their village of Épila on the banks of the River Jalón, nestles north of Calatayud. The climate is Mediterranean, with significant diurnal temperature changes and low rainfall. The vineyards lie at altitudes between 350 and 700 meters, and benefit from loose soil structure with notable limestone content. Many of the best vineyards are also conspicuously schistous. The team’s preference is for north-facing slopes, rich in stones, and planted to old vines. In their masterly hands, they give rise to Grenache wines (red AND white) of a purity and intensity we rarely see, at a price ridiculously fair, which have already been acclaimed by reviewers everywhere. One of the most remarkable aspects of this story is that Frontonio is quite literally the only producer making wines under the Valdejalón imprimatur. It is a tribute to Fernando’s intuition, particularly, that he could divine the remarkable potential of this area, whose results are, to our subjective judgment, consistently superior to anything else in Aragon.
We could not resist the sheer bravado of this stunner, which dares you to question all pre-suppositions about the lowly Carignan. It is almost redundant to mention the purity of flavor, which is this producer’s hallmark. Allied to such declamatory power and sculptural strength as to add up to a statement of true importance 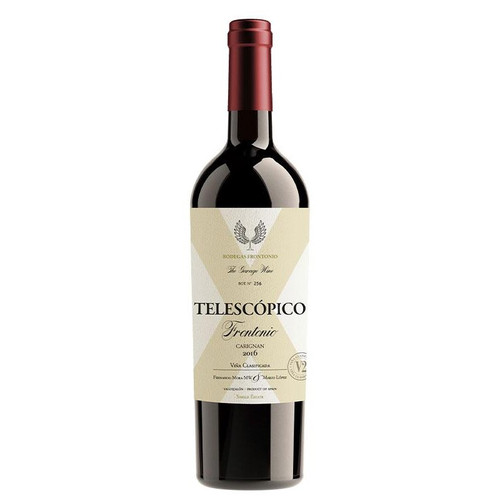