Vinous Reverie Notes
Somlo is Hungary’s smallest appellation and once an underwater volcano. Now dormant, its slopes of ancient sea sediment, hardened lava, and basalt are home to some of Hungary’s steepest, most densely planted vineyards. Driving up to Somlo from Lake Balaton, it’s like seeing an island rise up from the ocean’s horizon – nothing else around survived the retreating ocean. The oldest writings mentioning the wine of Somlo date back to 1093 and viticulture all the way back to the Romans. Hungarian Kings bought vineyards here, Maria Theresa and Queen Victoria both praised the wines, and insurgent Hungarian troops fighting against the Hapsburgs would solute the vineyards as they marched past at the end of the 17th century. In 1752, local laws stated that if you were found adding water to wine, expect 25 lashings as the minimum punishment. If you were found to be labeling wine as Somlo but using other fruit sources, you would be banned from making wine permanently and might even have your property confiscated. Perhaps most well known is that belief that drinking the wines of Somlo before copulation would guarantee a boy. “Nászéjszakák bora” or “wedding wine” was soon the favored wine of the Hapsburgs to keep the Monarchy in full swing. Today, “The Grand Old Man” of Somlo is Fekete Bela. 32 years ago, while on a trip to buy grapes for his garage production, a farmer offered to sell his vineyards on the southern slopes. Fekete accepted and approaching 90 years old, still tends his 4 hectares of beloved Fehervari-cru. Everything is done by hand, and much like the man, his wines are honest, engaging and highly expressive of the region.
Juhfark (Sheep’s tail) is a distinctive, almost extinct white grape variety found almost exclusively in Somló. The clusters are long, tightly packed and curve a little at the end hence the Sheep’s tail moniker. Naturally very high in acidity, it’s also fairly neutral on its own and instead absorbs and communicates the volcanic terroir rather than pronounced fruit flavors. However, after a few years in bottle this wine really comes alive. 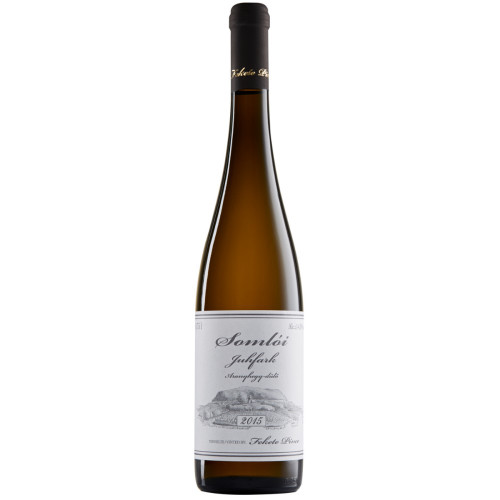