Vinous Reverie Notes
Grape growing for the Estevez family began in Bierzo in the early 20th century starting with the great-grandfather Ramon. The economic difficulties in Spain after the first World War then resulted in Ramon immigrating to Brazil to find work but to continue his connection with his family's land and heritage, he would use his savings to continue adding to the family's vineyard parcels in Bierzo. During such difficult times, his wife and children remained in Bierzo, including his son Antonio who would develop into a prolific writer.  The next twist and turn and turmoil in Spain happened during the Spanish Civil war and where, Antonio, as a thoughtful and intelligent writer, was opposed to the Franco regime and was forced to escape from Bierzo shortly before he would have been arrested and he then immigrated to Mexico.  Continuing the heritage of his father, however, he ensured that his family's vineyard holdings remained intact until a hopefully better time. The third generation, led by Antonio's son Helios, who even after also immigrating to Mexico to meet his exiled father, continued the family's ownership of its vineyards and he was also a prolific poet.  The fourth generation which is led by Helios's son, Helio, along with his siblings Carlos, Nandy, and Laura, then made the decision around 20 years ago to transition from selling the grapes from their vineyards each year into making wine. What has evolved is a state of the art winery that is making very expressive wines.  The literary tradition of the family has also continued in both the brand name of the wines ("Versos", or verses) and the addition of Helos's poetry about Bierzo to the label of each wine.  And so, with a family's twists and turns, which at any challenge along the way could have resulted in the long ago vineyards purchased with Ramon's savings being abandoned, as has happened in many areas of Spain, the family has persevered and has remained a steadfast guardian of its heritage. Tasting Notes: Aromas include blackberries, dark cherries, and boysenberries.  Flavors include blackberries, boysenberries, and dark chocolate.  There is a medium body but with a feeling of more “weight” across the palate, good balance and acidity, and a full, persistent, and minerally finish. Food Pairings: would include filet mignon, New York steak, beef stew, pork chops, pork shoulder, tuna, tapas, grilled chicken, Asian and Mexican beef, pork, and chicken dishes, lamb curry, Indian Tandoori dishes, charcuterie, and rich cheeses. 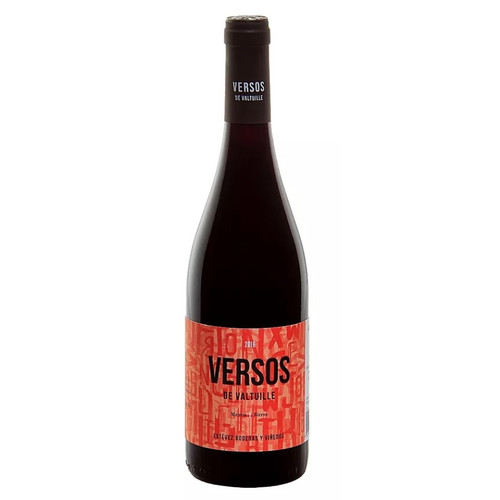