93 points Robert Parker's Wine Advocate
"... 2016 was a milder year, especially the summer, and the wine is fresh, sharp and precise. It's very much marked by the vineyard, as it's selected from the old vines from Miraflores, grapes that have unusual power and intensity, but at the same time, it keeps great balance and finesse. 3,000 bottles were filled in the spring of 2018."

Jancis Robinson
"Bottled 2018 under screwcap. This is the 2016 vintage released in 2018 and the fifth vintage of Florpower, an unfortified white wine, following vintages 2010 and 2012 (releases 44, 53 and 57) in origin and winemaking practices, and particularly the 2014 vintage (La Bota de Florpower MMXIV 67 Más Acá), which started a line followed by vintage 2015 (release 77) as well. Palomino Fino sourced from Pago Miraflores La Baja. It had a short period of ageing under flor in stainless-steel tank, after fermentation and intense biological ageing for 8 months in traditional 600-litre sherry casks.
Pale gold. Really toasty on the nose, almost a touch reductive in its light char and smoke character, even more marked on the second day. Rich, honeyed and toasty on the palate, hard to believe there is no toasty oak involved here, just those old sherry butts during the initial ageing under flor, but perhaps the tank ageing has brought that reductive character? Tastes more like burgundy than white wine from Jerez but with the flor salty character of a Manzanilla. Full flavoured and probably needs decanting. Terrific freshness and volume in the mouth considering the alcohol is so moderate. I am not sure what the flor is adding unless it is a yeastiness on the mid palate and then a salty freshness on the finish. Fascinating wine and deliciously distinctive. Gorgeous creamy texture adding further richness and depth but still with great freshness on the long, sustained finish. Less subtle than the Navazos-Niepoort 2015 but just as good. 17.5/20 points. (JH)"

Vinous Reverie Notes
Winery: At Equipo Navazos we are determined to extract the full potential of biological aging under flor at a natural (unfortified) alcohol level. It was following this path that the Navazos-Niepoort was produced for the first time in 2008. Then we started a number of experiments aging in butt and vats, using both Palomino Fino and Pedro Ximénez sourced from different terroirs in the Jerez, Sanlucar, and Montilla – and even some other non-commercial experiments in Spain’s northeast and northwest.
In 2018 we bottled the fifth vintage of Florpower (MMXVI, i.e. 2016), released as La Bota de Florpower 84 MMXVI, an unfortified white wine similar to vintages 2010 and 2012 (releases 44, 53, and 57) in origin and winemaking practices, and particularly the 2014 vintage (La Bota de Florpower MMXIV 67 Más Acá). In short, an earlier bottling with a shorter period of aging under flor in stainless steel tank, preceded by a short period of intense biological aging in traditional 600-liter sherry casks. We believe this wine shows the perfect balance between terroir and biological aging and a fresher version of Florpower than the first two releases.
Exclusively Palomino Fino sourced from the blessed plot known as Pago Miraflores La Baja, it is fermented traditionally, in the same casks where it is later aged under flor for 8 months. By July 2017 it went into a stainless steel tank where it remained under a more milder influence of flor yeasts until bottling in June 2018. 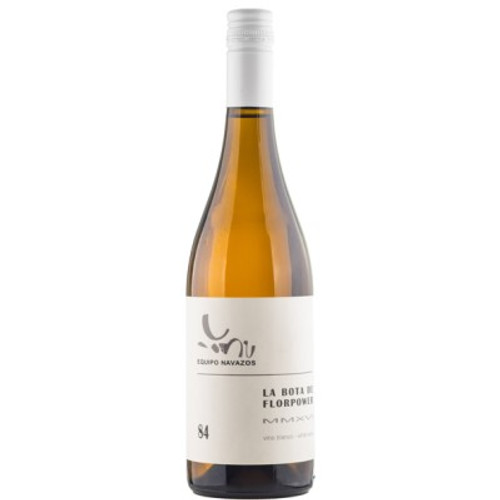