93 points Robert Parker's Wine Advocate
"I'm always reluctant to taste unbottled wines but I previewed the NV La Bota de Manzanilla 71, and the final wine was quite different to what I sampled then. So I took the opportunity to taste the bottled wine, which was sourced from La Guita. The golden colored wine averages seven to nine years of age and has somehow high acetaldehyde, with a volatile twist and great depth. It has pungent flavors and combines power with elegance. This should develop nicely in bottle for at least a couple of years, as they have now decided to bottle this wine with less frequency than in the past. Some 8,000 bottles produced"

Jancis Robinson
"Very pale amber with quite a bit of sediment. Pure, bread nose with massive refinement. So refreshing and fine with much more freshness than the average Manzanilla. Just the same build as a great white burgundy but more of a core of pure fruit and already accessible. So great! 18.5/20 points."

"This is the eighth release of La Bota de Manzanilla, bottled January 2017. The estimated average age of this Manzanilla is seven years. Bottled after only the slightest filtration.
Pale gold. Incredibly intense aroma of the sea as well as dried chamomile and wild grasses, even a note of hay. It’s as if you can smell the heat – or its effect – of the vineyard in a wine that is ultra-fresh and tangy. Smoky too. Really sour – deliciously so – on the palate. Tangy, bone dry, textured and just a little yeasty but the sweetness of yeast that you get on a champagne. It has the lovely bitterness of Campari but none of its flavours, it’s more like bitter orange pith/zest. We are by the sea but there is also the fine texture of the chalky soils and the precision of Manzanilla. 18/20 points. (JH)"

Vinous Reverie Notes
Winery: This is the eighth release of La Bota de Manzanilla de EQUIPO NAVAZOS, all of them with a pure Sanlúcar character, which this time we have sourced from a different place in order to retake with even more enthusiasm the authenticity of the original style of our manzanilla. It has been very helpful the fact that we have had access to several dozens of toneles and botas of outworldly quality, casks that have been carefully put apart and looked after by Eduardo Ojeda and his team along one decade, since they arrived to Sanlúcar in January 2007. The estimated average age of this manzanilla is seven years.
Showing a well settled and profound profile as well as salty and cheerful vibrancy, La Bota de Manzanilla No.71 is an unbeatable match on the dinner table. It excels with dishes from the Spanish seafood tradition: mackerel potatoes, tuna stew, oven preparations and boiled shellfish; and international cuisine: toro sashimi, marinated herrings, mussels. It has been bottled after only the slightest filtration in order to preserve its genuine character and its deep golden color with green hues as if straight from the butt [bota].
It is advisable to handle this manzanilla with just as much care as any other great white wine. It should be served at about 9/11ºC in fairly large stemware, never in the cliché copita. 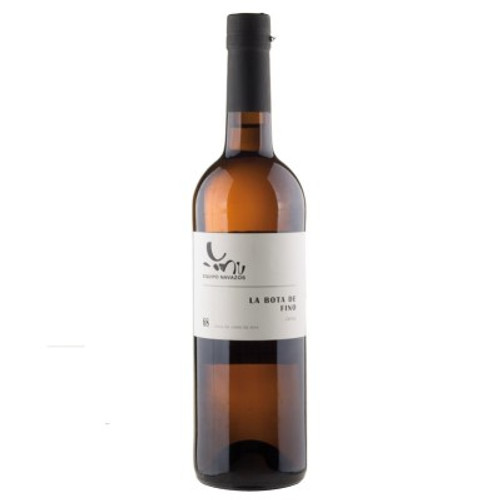