91 points Wine Enthusiast
“Five grapes go into this blend, including local varieties Braucol and Prunelard. The resulting wine is well structured, smoothly textured and welcoming. Red fruits and a core of tannins balance each other to give a wine that will be ready from late 2021. Organic.”

Vinous Reverie Notes
The eye-opening thing about Gaillac is to learn that once upon a time, before Crossing the Rubicon became an idiom, the region was one of two grand crus for the Romans during their occupation of Gaul (the other cru was the vineyard area over in the northern Rhone around Tain, Ampuis, and Vienne). Gaillac predates Burgundy for top-notch wine by 1,000 years and predates much of Bordeaux by 1,500 years. The reputation was such that in the Middle Ages the Benedictine monks of the Abbaye St Michel in Gaillac created a set of rules for wine production in order to better protect Gaillac’s image for fine wine. Francois I considerably reinforced the image when he gave his counterpart Henry VIII of England 50 barrels of Gaillac at their historic meeting in 1520.
As for Domaine Rotier, the short history begins in 1975 when Alain Rotier’s parents bought a domaine in Gaillac. Slowly, they began to restore its largely abandoned vineyards, and so made a small contribution to the region’s resurrection. In 2005, having long been uneasy with much of conventional farming, they decided to go fully organic in the vines. In 2009 they went for certification, a three-year process that was completed in 2012.
Les Gravels is made with local grapes. Braucol is thought to be a Basque native, prized for tannin and color. Duras is very cross between Tressot, a Burgundy native, and Jura’s Savagnin. It’s prized for intense color, ripening ability, low tannin and high malic acid hence good freshness. Prunelart, practically wiped out by phylloxera, has been shown to be the father of Malbec. 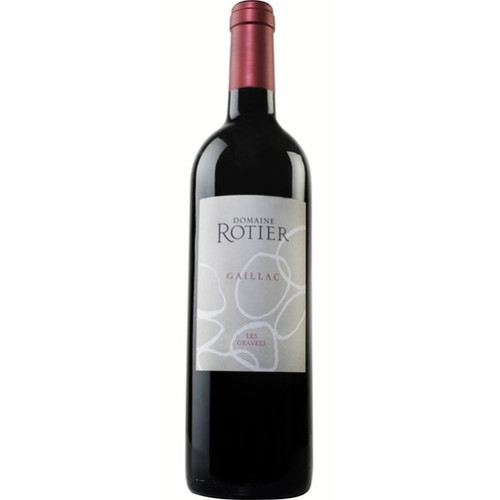