Jancis Robinson
"60% Grenache, 30% Syrah, 10% Mourvèdre. Cask sample.
Tasted blind. Leather and tar on the nose – ambitious and savoury in style. Succulent red fruit on the palate, with a lovely peppery tannic note and lightly chewy tannins. More gentle and drinkable than a Châteauneuf, but with just as much enjoyable savoury flavour. 17/20 points. (RH)"

Vinous Reverie Notes
Jancis Robinson - Wine of the Week
"Of the 972 Rhône wines I tasted this autumn, only eight made my shortlist to feature as wine of the week – and all of them were made by Le Couroulu in Vacqueyras.
There are other domaines whose wines scored as highly, and indeed higher – but they are usually already well-known and almost invariably expensive. There are other domaines who make great wine but in quantities too small to be easily found, and others still who make one very good wine but several other duds.
Whereas Le Couroulu delivers the WOW holy trinity: affordability, availability and dependability.
They produce two Vacqueyras reds, labelled Cuvée Classique and Vieilles Vignes. I tasted the 2017 vintage of both wines blind and scored them 17. I then tasted the three preceding vintages of both cuvées at the domaine, and gave all but one of them at least the same score or higher. Hence I am recommending either bottling from any vintage. (Our tasting notes database reveals that Jancis has also rated their wines highly).
So much for the reasoning, but what of the wine itself? Both are based on Grenache, the beating heart of the southern Rhône, which gives the pure, rich red fruit that has made Châteauneuf so popular. Both also have at least 25% Syrah that adds black fruit flavours as well as something more peppery. The concentration of that fruit varies with each vintage, with the cooler 2014 offering a lighter, more herbal quality that I especially liked. (I purchased a bottle of the 2014 Vieilles Vignes and opened it this week for verification purposes).
They are savoury, gastronomic and satisfying, with the full weight and muscular structure of the southern Rhône, but effortless balance too, and a sense of freshness that is frequently missing from a region that too often pursues power above all.
They are as thoroughbred as good Châteauneuf-du-Pape without trying so hard to impress, and come at much better prices. The Vieilles Vignes costs a few quid more, for which you get more concentration and perhaps greater ageability, but not a categorically 'better' wine. Both are authentic, traditional styles that will tick all the boxes for lovers of southern Rhône reds..."
Le Couroulu (the name means curlew in Provençal, as the label suggests) is one of those sweet-spot producers whose wines are a joy to discover.
Winery: Domaine le Couroulu, founded in 1928 and still owned by the Ricard family, is known for producing some of the most full-bodied Vacqueyras and other wines from their 20 hectares of old Grenache and Syrah vines. The estate is named for the Curlew bird, which is known in Provencal dialect as Couroulu, and is the signature emblem on the domaine’s labels. Robert Parker rated the estate as an excellent producer in his book, Wines of the Rhone Valley, and cited it among his “Best European Wine Values.” Most recently, he bestowed even more praise, asserting that “this is a sensational estate… whose wines have given [him] enormous pleasure for nearly two decades” 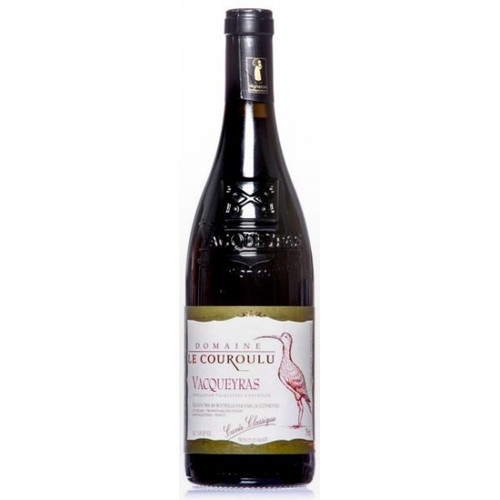