93 points Wine Enthusiast
"Sun-kissed raspberries and rose petals perfume this bright, penetrating blend of Grenache, Syrah, Mourvèdre and Cinsault. It's a surprising contrast to this producer's equally delicious but significantly brawnier 2017 bottling. Full bodied but freshly composed, it highlights crisp red-plum and
cherry flavors lifted by a mineral undertow and brisk acidity. This lovely wine is ready now but should hold well through 2026."

91 points Jeb Dunnuck
"More rounded and fleshy than the 2017, yet also tannic, the 2018 Vacqueyras has classic notes of red and black fruits, garrigue, and pepper. Based on 80% Grenache, 10% Syrah, and the rest Cinsault and Mourvèdre, brought up all in tank, it’s going to benefit from a year or two of bottle age yet keep for upwards of a decade."

Vinous Reverie Notes
Grenache, Syrah, Mourvedre and Cinsault. Domaine la Garrigue was founded in 1850 by the same family that runs the property today, Famille Bernard. Brothers Maxime and Pierre Bernard, of the 5th generation, are at the helm of the estate, with Maxime acting as general manager while Pierre focuses on the family’s restaurant nestled in the hills below the Dentelles, Les Florets. They farm vines of Grenache, Mourvedre, Cinsault, Syrah, Grenache Blanc and Clairette on the three primary terroirs of Vacqueyras. Their vines’ average age is about 50 years old, with some vines well over a century. The reticent but very talented Virginie Combe, a member of the 6th generation, is in charge of the winemaking with Philippe Cambie’s guidance. This Vacqueyras possesses a notable meaty quality with firmer tannins and a seriously dense core of black fruit and iron. 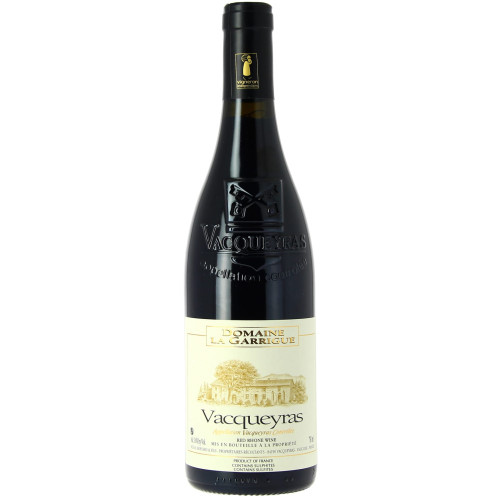