90 points Wine Enthusiast
“This rich wine is seriously structured, with firm tannins still in place. They surround potentially rich and luscious blackberry fruits that are beginning to shine. Drink the wine from 2023.”

Vinous Reverie Notes
Long before Argentina was even a country, the Roman aristocracy enjoyed the Malbec grape from Cahors. They even had a pet name for the grape, referring to it as “the black wine of Cahors.” By the 13th century, the city of Cahors could be considered “the London of its day” - a center of financial activity. In the Middle Ages, the reputation of Malbec wine from Cahors was so strong that it was exported all around the world and served at many Palace dinners. Then, over centuries, came wars, pests, frost and market changes that relegated Cahors Malbec to a neglected area of the world’s wine stage. In 1971, Cahors achieved its Appellation designation. This led producers to put a new emphasis on quality. The shift to quality started with improved viticultural practices, longer maturation time and better-quality French oak
Domaine du Theron was established in 1973, two years after the region became an appellation. It is situated in the village of Prayssac in the valley of Lot. It is here that the terroir allows the Malbec to offer a more open texture and soft fleshy character. This is one of three estates owned by the Pelvillain family, who has roots in viticulture in this region dating back to the 19th century. 100% Malbec, not a blend as most wines in this region are blended with Merlot -as well as the Domaine’s top cuvee. 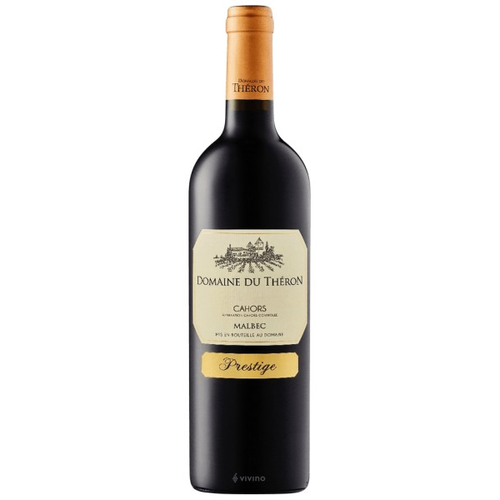