Jancis Robinson
"Certified organic and biodynamic. On white calcareous clay. Hand-harvested. Fermented and aged in stainless steel.
Cobnuts and crushed tarragon with a vanilla sweetness on the nose. Immediate depth and life apparent in the first mouthful of this wine. Steel and mountain-stream pebbles; sea glass and samphire and kiwi fruit. Through and up the back of the throat there is a gentle burn, almost more of a hum or a burr, that tastes like wasabi powder and ground cardamom and ground ginger and white pepper. And yet, strangely, on tasting this wine you would not call it spicy. It's Macavity; it's fugacious; it tastes of smoke and mirrors. And it is so, so salty. Japanese food? Oysters and seaweed? I find myself craving a pebble beach and a cold, salty wind and iron-grey sea and a cup of picked cockles. 17/20 points. (TC)"

Vinous Reverie Notes
Sancerre is not exactly a hotbed of experimentation. Knowing that it can generally be sold on name alone, its growers hew toward conservatism, and it requires a particularly driven vigneron to veer from the citrus-and-chalk orthodoxy the market has come to expect from the appellation. Enter Cyril de Benoist de Gentissart, the dynamo proprietor of Domaine du Nozay, in Sancerre’s far northern reaches. Cyril’s father Philippe planted the first Sauvignon Blanc here in 1971, and today the Domaine encompasses 15 contiguous hectares of vines on these steeply sloping, variously oriented hillsides near the town of Saint-Gemme en Sancerrois. Cyril farms biodynamically—Demeter-certified as of 2017—which already puts him in a tiny minority of Sancerre producers. He is also one of only a handful of growers in the world experimenting with sonic stimulation in his vineyards: speaker towers installed among his vines emit tonal sequences at intervals throughout the day, promoting sap circulation and nourishing overall plant health. It may sound outré, but the results speak for themselves. “La Maratre” is the name of the parcel just above Nozay’s cellar, which burrows into the side of a gentle south-facing hillside. Cyril’s 15-year-old vines in this relatively rich Kimmeridgian marl—known locally as “Terres Blanches” for its tendency to turn white during dry periods—produces a wine simultaneously bright and earth-driven with an expansive, clinging finish of notable length. 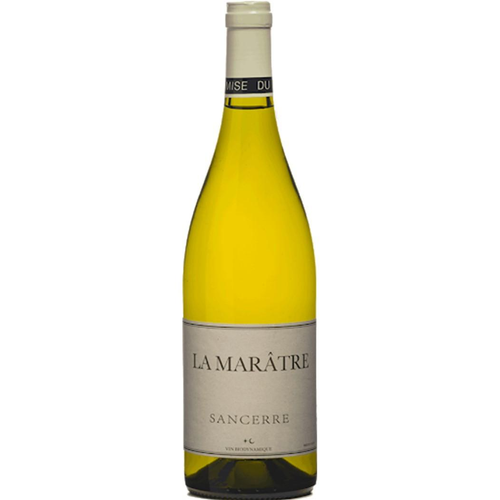