Vinous Reverie Notes
Importer: The Chiarli family was also instrumental in taking Lambrusco from being just one among innumerable Italian local wines to its status as a popular international phenomenon and one of the country’s primary exports. A century after the winery’s founding, the Chiarli family pioneered the use of the Charmat or tank method of sparkling wine production for Lambrusco. Whereas the customary “ancestral” method always resulted in dry, fizzy, cloudy wines because it continued to ferment inside the bottle after it was sealed, Charmat-method Lambrusco introduced several advantages. It allowed filtration to make the wine clear, offered the opportunity to increase the bottle pressure to the fully sparkling level, and made it possible to bottle a wine that would retain residual sugar. The new Lambrusco—sweet, red, clear, and effervescent—became a sensation, and for a couple of decades, it was the most-imported wine category in the United States. A hundred years after its founding in 1860 the Chiarli family debuted a new wine, appropriately named "Centenario." It used the Charmat method of effervescent winemaking that Chiarli had introduced to Lambrusco production area a few years earlier. Centenario—a new wine for a new age—showcased the slightly sweeter side of Lambrusco. The wine is amabile, literally "lovable," a designation for wines that are sweet but not so sweet they can only be served with dessert. It's produced with Lambrusco Grasparossa, a grape variety with deep color and high natural acidity that can counter the sugar content. The result is a well-balanced, intense red, soft, lightly effervescent wine that is indeed lovable. 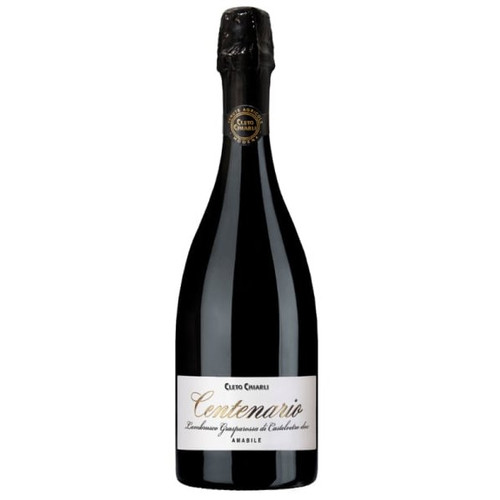