93 Points Wine Enthusiast
"Barrel Sample. This wine is poised between great fruits and firm tannins. It has both in abundance, bursting with black currant flavors and lively acidity."

Vinous Reverie Notes
Jancis Robinson - Previous Vintage Wine of the Week
"As I reported in Left-bank improvements from a big French bank, I recently had a chance to enjoy three complete verticals from three of the Bordeaux châteaux that are part of CA Grands Crus, the fine-wine arm of Crédit Agricole.
The three flights – of Chx Grand-Puy Ducasse in Pauillac, Meyney in St-Estèphe and La Tour de Mons in Margaux – ran from 2005 to 2015 and were designed to show, quite convincingly as it turned out, the improvements made under the aegis of Thierry Budin.
I was particularly struck, not for the first time, by the value on offer from Ch Meyney. This is a superbly positioned property, overlooking the Gironde as top performers are said to do, on a gentle hill between Chx Calon-Ségur and Montrose.
The property, once a convent, was not included in the 1855 classification, but surely it would be today. Note, for example, how well it did in the St-Estèphe flight of our recent retrospective of 2005 bordeaux. Ch Meyney is of course a shoe-in as a cru bourgeois but it is considerably more ambitious, refined and long-lived than most of them.
I was very taken by Ch Meyney 2012 St-Estèphe in this vertical, and indeed St-Estèphe in general with its deep, damp soils seems to have coped particularly well with the summer heat in 2012 (see what I wrote in 2013). I have been impressed by how well several other 2012 St-Estèphes have been developing recently. This is a vintage of Meyney with a particularly high proportion of both Merlot, and Petit Verdot, this late-ripener demonstrating just how ripe the grapes were this year.
Although the proportions of varieties in the vineyard are 50% Cabernet Sauvignon, 35% Merlot and 15% Petit Verdot, the assemblage of the 2012 is 40% Cabernet Sauvignon, 42% Merlot and 18% Petit Verdot. The wine is still a dense, youthful crimson but is absolutely classic aromatic ‘stony’ St-Estèphe on the nose. On the palate the wine is more obviously generous (thanks to all that Merlot?) with lovely flattering roundness, almost but not quite obliterating the promising tannins on the end. I suggest ideally drinking it between 2020 and at the very least 2035 but you could certainly enjoy it already with chewy food such as roast meat. But this is a wine that offers classed-growth quality at a very reasonable price.
Château Meyney has 51 ha (126 acres) of vines in, unusually for the Médoc, a single block. About 2.6 m (8.5 ft) below the gravelly topsoil is a layer of blue clay, which doubtless helped to moderate the ripening process during the driest summer months of 2012. Planting density is 7,600 vines per hectare and the average age of the vines is 37 years, although these include some newer plantings of Merlot (on land previously dedicated to Cabernet Franc) and some seriously old vines. The proportion of new oak tends to be about 40%.
Meyney was part of the Cordier group for most of the twentieth century and was taken over by CA Grands Crus in 2004. Today, like Grand-Puy Ducasse, it is the responsibility of technical director Anne Le Naour, who has been advised by Hubert de Boüard of Angélus in St-Émilion as consultant oenologist since 2013."
The 51 hectare Left Bank vineyard of Chateau Meyney is planted to 60% Cabernet Sauvignon, 30% Merlot and 10% Petit Verdot. The current vineyard plantings represent a change in the Chateau Meyney vineyard. Previously, there was some Cabernet Franc planted in their Medoc vineyard. Those vines were removed and more Merlot was added to the vineyard in its place. The vineyard is in 1 large, single parcel, which is unusual for such a big vineyard. Chateau Meyney has a terroir of gravel and sand with a large streak of blue clay close to three meters thick, that resides underneath the gravel and sand, top soil. The vineyard is planted to a vine density of 9,000 vines per hectare. The vines are on between 35 and 40 years old. However, they also have very, old vines that are close to 100 years of age, which are some of the oldest vines in the Saint Estephe appellation. Tasting Notes: A medium bodied, soft, polished wine that delivers its red fruits, tobacco, cedar and spicy cherries with little effort. This wine will be almost perfect on it's arc in a year or two. 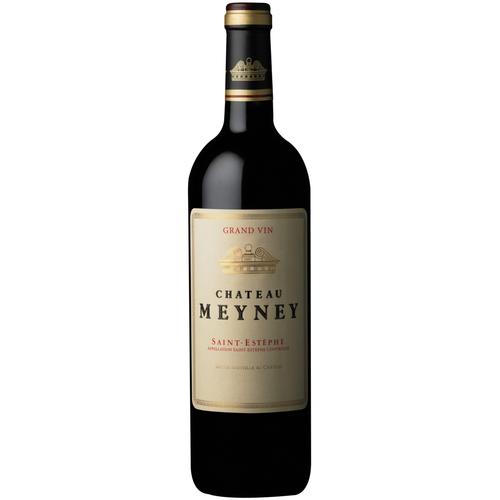