95 points Wine Spectator
Powerful, with a round, almost creamy core of blackberry and raspberry fruit all layered with cocoa, sweet toast, mesquite and fig paste. Long and rich through the finish. Still quite primal, with lots in reserve. Best from 2010 through 2030.

95 points Robert Parker's Wine Advocate
"As I stated last year, there is no Hommage a Jacques Perrin in 2006, but Beaucastel’s 2006 Chateauneuf du Pape is performing even better from bottle than it did last year. Its dense plum/ruby/purple color is followed by a big, sweet perfume of black truffles, camphor, earth, incense, new saddle leather, and loads of peppery, blackberry, and herb-infused, meaty, black cherry fruit. Deep, full-bodied, and dense, with sweet tannin, this explosively rich Chateauneuf is a stronger effort than the 2005, 2004, or 2003. Anticipated maturity: 2012-2028."

94+ points Jeb Dunnuck
"A fantastic wine, the 2006 Château de Beaucastel Châteauneuf-du-Pape fleshes out with air and displays deep, earthy aromatics of dark fruit, roasted meat, graphite, mushroom and old wood. In the mouth, the wine displays a medium to full bodied, structured personality to go with a fantastic texture, concentrated fruit and a long finish. If drinking anytime soon this needs plenty of air."

Jancis Robinson
"Rather like the 2006s from Jaboulet, this wine is noticeably – determinedly? – fresher and cleaner on the nose than some previous vintages used to be. I wonder if this is the Pascal Chatonnet effect? Not at all ‘hot’, the 2006 is very slightly muted on the nose (not a trace of the horsiness for which Beaucastel has in the past been reproached) and then extremely sweet and glamorous on the palate – fantastic polish with very fine tannins on the finish and a suggestion that there is a great deal still to be expressed. There’s lift at the end but it needs to take on flesh in the mid to end palate before it really delivers on its undoubted promise. 17.5+++/20 points." 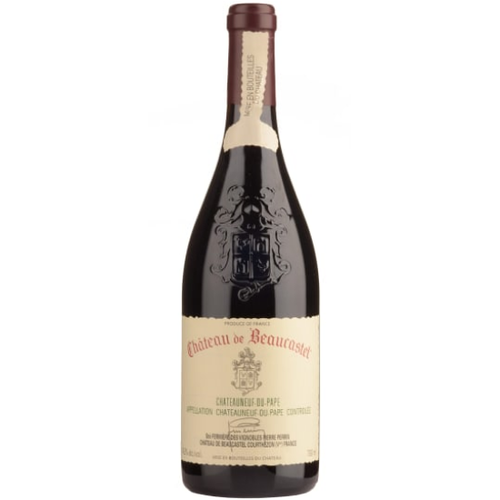