93 points Robert Parker's Wine Advocate
"There is a big jump in depth, complexity and nuance between the Monastrell and the 2017 Vino de Finca, which is a blend of Monastrell with almost 25% Garnacha. This comes from four plots that were selected from what was previously used for the entry-level Monastrell; they aim was to find a wine with more finesse and elegance but with the inherent power of the zone. This is only the third vintage for this cuvée, and it feels quite established and different from the rest of the range; it has less varietal character and is more about the place, getting closer to the single-vineyard bottlings where they do not search for fruit character. The idea here is to ferment at temperatures that are quite so low and to stabilize the wine in oak barrels for a long-ish time (12 months in 500-liter barrels and 5,000-liter oak foudres). They are wines of sun and limestone. This is a good reflection of it with a perfumed and floral note on the finish (elegance!) that is quite remarkable. 31,000 bottles produced in 2017. It was bottled in November 2018."

Vinous Reverie Notes
Widely acknowledged as the leading proponent of Monastrell in Spain, José Maria is not content to just double down on this variety. While the ubiquitous Monastrell is at the heart of his endeavors, he’s always played against expectations in pursuit of the true meaning of his sandy clay and rocky terroir. In the 1990s it was with Cabernet Sauvignon and Syrah which have been completely (in the case of the Cab) and partially replaced with Garnacha. One look at his soils, in many cases remarkably analogous to Châteauneuf-du-Pape, Garnacha seems the obvious choice but one which few in Jumilla has sought to explore apart from José Maria. With more and more Garnacha coming online from the grafting over of his Cabernet and with the planting of young vines, a new expression of Jumilla began to form at Casa Castillo – one that uses older vine Monastrell as its base but enlivened with about 5% Garnacha. Called Vino de Finca, or Estate Wine, this new cuvée was first made in 2015 and shows what a remarkable difference that small amount of Garnacha can make. Of course it is not just the blend that makes Finca so expressive, but its indigenous fermentation, inclusion of whole clusters, and a gentle maceration – all in 1200L French oak vats. 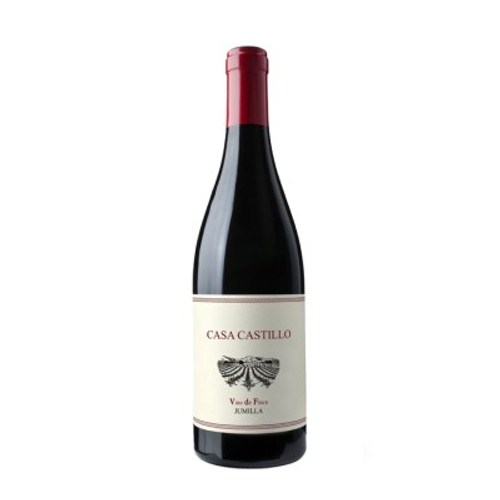