91 points Robert Parker's Wine Advocate
"Always one of my favorite values from Spain, the 2016 El Molar, pure Garnacha from a plot that gives the wine its name, the example from the cooler 2016 showed a little riper than I expected. The vintage was in a way similar to 2013, but the 2016 showed more hints of development, and it might have been going through a closed phase when I tasted it some six months after bottling. The grapes from this sloped and north-facing plot fermented with 30% full clusters and natural yeasts and matured in used barriques for eight to 11 months. If the nose is not as expressive as expected, it's the palate that should guide you through the real character of this wine, juicy and with fine tannins and a dry finish. I tasted from two bottles that showed similar character. I found it a little awkward, and I made a note to try to taste it again the next time I review the region. Quantities are slowly growing as more vines come into production. 51,000 bottles produced. It was bottled in April 2017."

Jancis Robinson
"Dry-farmed Garnacha. From 2015, this is a blend of three vineyards in the same area but with different aspects; north-facing gravel soils and south-west-facing sandy loam. 10 days difference in harvest dates. Vines 10–14 years old. Hand-harvested; semi-carbonic maceration with 60–80% stalks; 8–10 days’ fermentation in underground concrete tanks then 12 months in 500-litre barrels and 5,000-litre foudres. 30,000 bottles produced.
Sweet and rich and lively – contained and not fat. Strawberry fruit. Lots of life and fun. 17/20 points."

Vinous Reverie Notes
While Garnacha has been grown in Jumilla for centuries it has never been taken quite as seriously as Monstrell and most of it has been blended with other varieties. This seems all the more remarkable considering how closely the terroir of Jumilla resembles that of the  Southern Rhone – hot, dry summers and a limestone subsoil topped with gravel. A few years back Jose Maria planted Garnacha in some of his most gravelly soils as an experiment. Named for the mountain with overshadows his property, El Molar is fermented whole cluster with indigenous yeasts and spends 12 months in neutral 500L French oak demi-muids resulting in a wine that is pale, fresh and aromatic – a promising new directing for the property and the DO. 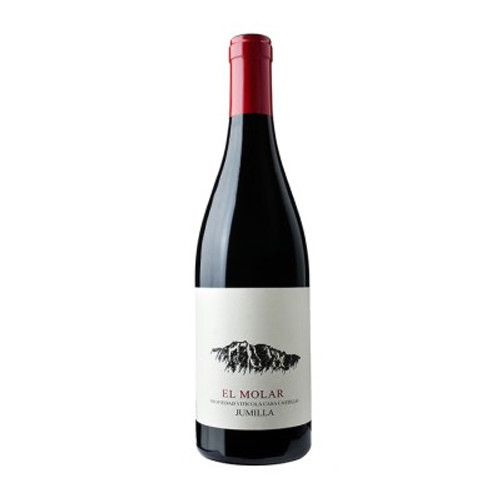