Jancis Robinson
"100% Nebbiolo aged for 12 months in large oak casks.
Mid ruby. Youthful, serious and reluctant on the nose. Youthful and a little austere. The fruit is very slow to unfurl, while showing great depth. Compact and spectacularly balanced with a layer of powdery tannins and a hint of liquorice. Minerally, complex and long, but still very embryonic. 17.5/20 points. (WS)"

Vinous Reverie Notes
Walter Speller of JancisRobinson.com - Some great pergola wines
"Prünent is the local name for Nebbiolo in Oira di Crevoladossola in the most northerly part of Alto Piemonte, and grown in pergola-trained, old vineyards, of which many vines are ungrafted. The wine is fermented by indigenous yeast and stays on the skins for around 10 days, after which it is racked off in large oak casks, where it undergoes malolactic conversion and where it stays for a total of 12 months."

Garrone is a small winery nestled into the Alps in the Ossola Valley, the northernmost appellation in Piedmont. The winery, in fact, is only 7 miles from the Swiss border and is part of the the Valli Ossolane appellation. The vineyards fall at about the same latitude as those of Valtellina and similarly, at such northern reaches, the vines are planted solely on south-facing slopes. The estate dates back to 1920, but it was not until 1994 that their first commercial production was released – a whopping 36 bottles! Along with the Valli Ossolane growers association, the family is dedicated to the preservation of the culture and winemaking of the area. One of the prizes of the Ossola Valley is the local biotype of Nebbiolo called Prünent. It is believed the rest of the Nebbiolo in Piedmont actually evolved from this local varietal whose bunches are more compact and cylindrical than the Nebbiolo grown elsewhere. Cantine Garrone produces a monovarietal Prünent from vines averaging about 60-80 years old (many on original root stock). These wines are truly elegant, aromatic and precise mountain wines, and are a treat for any fans of Alto-Piedmont Nebbiolo! 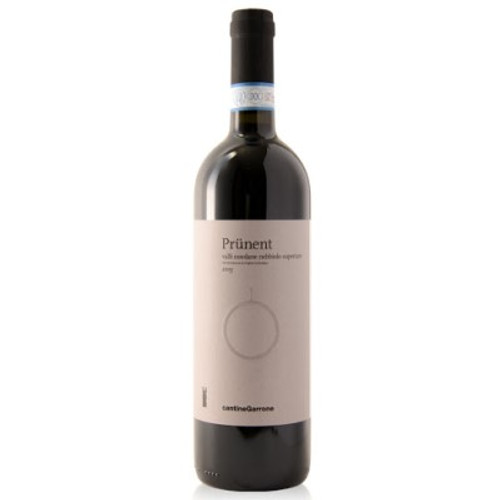